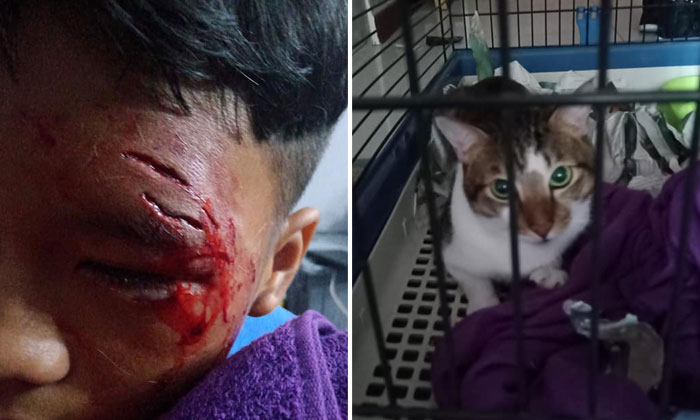 The Society for the Prevention of Cruelty to Animals (SPCA) strongly advises all cat owners to sterilise their pets after an isolated incident involving a boy who was attacked by his family cat after a community cat had followed him home.

Facebook user Azzurri Azmi shared on Wednesday (Mar 18) that his son had fed a stray cat in their neighbourhood the night before that had unknowingly followed him home.

"Our male cat was also at the corridor when he came back and suddenly jumped to [my son]'s face and [bit] him."

He said his son ran screaming to his room while the cat was still on his face biting him.

"I had to grab our cat by the neck and choke it so it could let go of my son's face," he wrote.

"In the process, I had a few minor scratches on my left arm."

He said his children are traumatised by the incident and now are wary of their cat.

He added that his cat's behaviour was unusual as it is usually quiet and timid.

However, he caged it and has arranged for it to get neutered.

According to the SPCA this is the right move.

In response to a Stomp query, SPCA's executive director Dr Jaipal Singh Gill said: "This appears to be an isolated incident linked to territorial aggression displayed by the pet cat.

"We strongly advise all cat owners to sterilise their pets and keep them safely confined indoors.

"This will minimise the chances of such unfortunate incidents occurring, and will keep you and your pets safer."

Related Stories
Retiree stung to death by hornets while hunting for fruits in Hillview forest
Vlogger tries to eat live octopus -- but gets it stuck on her face instead
Attack of the angry bird at Toa Payoh
More About:
animal attack
cat
SPCA
injured
bleeding