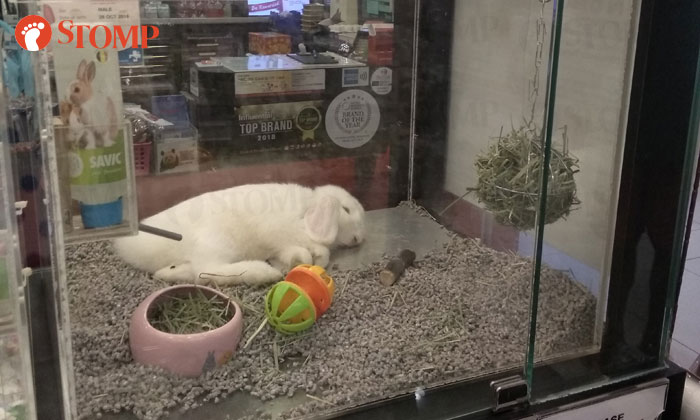 Singapore Society for the Prevention of Cruelty to Animals told Stomp that it is investigating the welfare of a rabbit kept on display at Pet Lovers Centre's White Sands outlet after a Stomper expressed concern over its living conditions.

Stomper SR Kumar told Stomp that he was worried for one of the rabbits kept in a display case at the pet store.

"For the past two weeks, I've noticed a pitiful white baby rabbit placed in a very tiny enclosed transparent square box at the entrance of Pet Lovers Centre," said the Stomper.

"The little pet never moved during the multiple times I have visited the store recently.

He told Stomp that he felt the compartment was cramped and not big enough for the rabbit to move freely.

"After making a quick check with the staff, they told me they release the rabbit inside the store to roam freely in the early morning," the self-professed animal lover said.

"I feel like the little time it has to hop away from the tiny box is definitely not sufficient.

"One look and you can see it's very sad and depressed."

According to Kumar, the sign on the display case indicates that the rabbit was born in October 2018.

"I wonder if this means that it has been caged in a tiny space for four months," he said.

"No wonder it's weak and can't move freely and sad."

"I'm very worried for this little rabbit and I think it needs help fast."

After Stomp conveyed Kumar's concerns to Pet Lovers Centre, the company responded with the following statement:

"Rest assured our space set up for the display of small animals has been properly inspected, evaluated and conforms to AVA's (Agri-Food and Veterinary Authority of Singapore) standards and requirements.

"You may be pleased to know that besides the basic necessities such as daily food, hay, toys, and beddings (all of which are constantly kept clean), our supportive care also extends to the environmental enhancements at our outlets, such as proper fan and air ventilation which run 24/7 to avoid any drastic temperature increase, and to maintain optimum cage temperatures that are attuned to the animals' climatic needs and natural habitats."

It added that they also have vet-trained personnel called pet care consultants to ensure due and proper animal husbandry in our outlets.

"Our chief pet care consultant happens to be very experienced and learned in this area, a wonderful resource when it comes to what to look out for to see if a small animal is happy or healthy," a spokesman said.

"We hope the above explanations address your concerns about our setup for these small fur animals."

"At the end of the day, we do value the lives of these small animals as much as you do."

"An investigation needs to be conducted to determine the welfare of the rabbit.

"Our officers are currently investigating."

An AVA spokesman told Stomp it has received a report on this and is looking into it.