‘Sovereign' woman is physiotherapist born and raised in Singapore, moved back here after 20 years in Australia 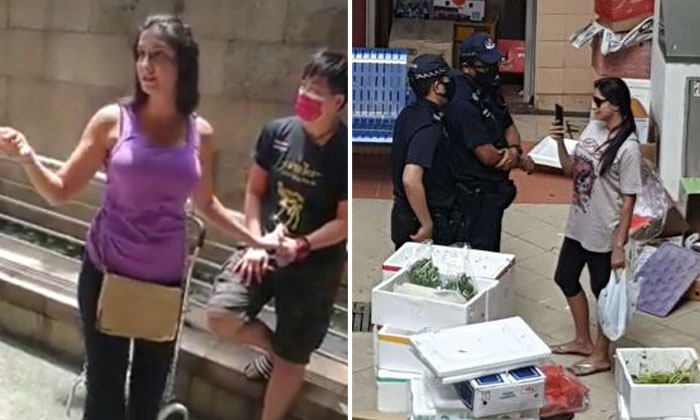 A Singaporean woman who was recorded not wearing a mask at Shunfu Market and engaging passers-by in a heated argument has been charged in court.

Paramjeet Kaur, 40, was slapped with five charges, including four counts under the Covid-19 (Temporary Measures) Act and one count of being a public nuisance.

Kaur is represented by lawyer Satwant Singh, who told the court that he wanted to advise her on the law, reported The Straits Times.

Appearing in court via video link with a mask across her chin, Kaur said: "I am a living woman and that is my only capacity in this matter. I extend my sovereign immunity to Satwant and I asked Satwant to represent me."

On the first day of the circuit breaker period (Apr 7), she insisted on eating glutinous rice at a hawker centre, reports Chinese daily Lianhe Zaobao.

When enforcement officers tried to advise her, she took out her phone and recorded them instead.

In another incident earlier reported by Stomp, Kaur was stopped by police officers at Shunfu Market on Apr 14 after acting provocatively when approached by National Environment Agency (NEA) enforcement officers.

In a video circulating online, she is seen not wearing a mask and taking photos and videos of police officers while refusing to cooperate with them.

On May 3, she appeared at Shunfu Market at Block 320 Shunfu Road again without a mask.

This time, a stall vendor's daughter tried to advise her to wear a mask but Kaur became aggressive and refused to do so.

She allegedly scolded the vendor's daughter for being nosy and hit her.

Police were alerted to the scene.

A video shows Kaur trying to cover her face with her arm and holding on to a phone together with a 47-year-old woman, whom she had allegedly assaulted, while arguing with another group of people.

When another person tells her she is not making sense and that she needs to follow the rules in Singapore, she retorts: "That's the thing - I'm not a person, I'm 'we the people'."

Kaur was arrested for assaulting a member of the public, causing public nuisance and not wearing a mask on Monday (May 5) at 9.10pm.

She has been in remand since her arrest.

The accused's mother told Lianhe Wanbao in an interview that Kaur was born and raised in Singapore.

After graduating from a polytechnic at the age of 20, she went on to study and work in Australia.