South Korean man attacked 2 S'poreans and swore at police, saying: 'I want to go to prison' 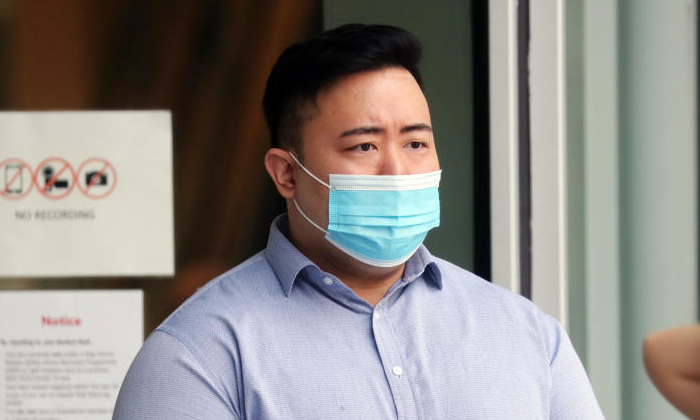 A South Korean man, who was interviewed by the police when drunk, assaulted two Singaporeans in Clarke Quay, swore at an officer and shouted at the victims.

On Friday (Jan 21), Kim Eui Woong, 36, who worked in a bank then, pleaded guilty to three charges for offences that include voluntarily causing hurt, and was fined $7,300.

Another two charges were taken into consideration during his sentencing.

On the evening of March 12, 2020, Kim drank two bottles of beer and a bottle of soju in a Korean restaurant. He consumed a bottle of whisky at Club Illusion in Clarke Quay before he became drunk and left at around 3am.

When he saw two strangers - Mr Law Beng Chong, 47, and Ms Lim Seongyeon, 25 - he cursed at them and lunged towards them.

The police arrived at around 3.15am and noticed Kim was getting agitated as an officer spoke with the victims.

Kim kept inching towards the duo, refusing to cooperate with the officers, and took out his phone to film the incident.

He shouted repeatedly at the victims, cursed at an officer and said he would sue all of them.

Kim asked one of the officers for his card before walking off. He cursed at the officer and said thrice: "I want to go to prison."

Urging the judge to sentence Kim to a week in jail and a fine of $2,800, DPP Sim said in his submissions: "The manner of the attack was violent... It was unprovoked and one-sided."

He noted that there was no serious injury and that Kim paid compensation to the victims. The amount was not stated in court documents.

Defence lawyers Andre Jumabhoy and Elaine Low asked the judge to issue a fine of $5,000, adding that Kim had taken responsibility for his offence and stopped alcohol consumption.

"He planned to commence a start-up but it was floundered by the (Covid-19) pandemic. Uncertain of the future, he went out and drank more than he ordinarily did," said Mr Jumabhoy, who added that Kim has been married to a Singaporean for around four years and holds a master's degree.

In a separate case, a British man headbutted a stranger in the nose outside the now-defunct Kilo Lounge in Tanjong Pagar.

Tyson Wayne Plant, 33, was on Thursday (Jan 20) fined $5,000 after pleading guilty to one charge of voluntarily causing hurt. His job was not stated in court documents.

On Aug 18, 2018, he argued with unknown patrons after drinking with a friend in the nightclub, and one of them punched his face.

Singaporean Macaulay Nick Olinik, 30, stepped in to defuse the situation, but as he walked away, Plant headbutted him in the nose, fracturing it.

Mr Olinik fractured his hand after the incident, but this was not caused by Plant, noted DPP Keith Thirumaran, who left Plant's sentencing to the court.

He added that Plant had been fined in 2017 for drink driving.

Defence lawyer Yusfiyanto Yatiman said in mitigation that Plant acted out of anger as he was punched before that, but clarified that his client was not drunk.

Plant paid $12,000 to the victim last year (2021) to cover medical and transport bills and expenses linked to the fractured wrist, although it was not caused by him.

Handing him a fine of $5,000, the judge said: "I hope the accused understands that his own actions have caused injury and alcohol definitely played a part.

"(Alcohol) has caused you to come to court twice. If it causes you to do such things, you might want to reconsider consuming it at a public place."

Those who voluntarily cause hurt can be jailed for up to three years and fined up to $5,000.

Related Stories
Repeat drink driver offered $1,000 bribe to cop: 'Whatever you want, I will do for you'
2 weeks' jail for man who 'attacked' 2 buses at Woodlands depot after 7 cans of beer
Drunk ex-teacher told police that he would 'take them down', said 'you can't arrest me'
More About:
attack
assault
dispute
drunk
public nuisance