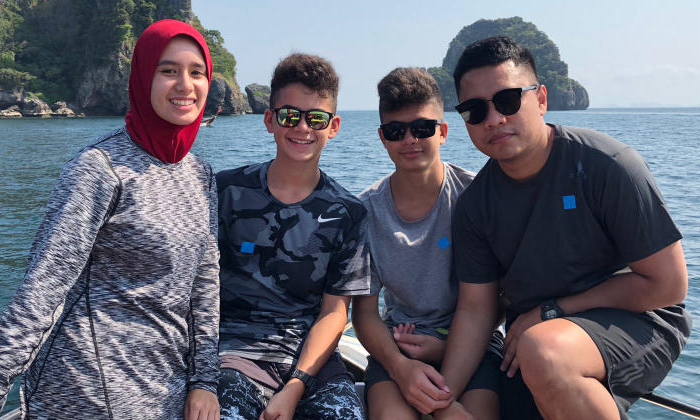 As per her usual routine, Ms Noraini Abbas, a Singaporean woman, visited the Al Noor Mosque in New Zealand last Friday for prayers with her son Sayyad Milne, 14.

Following custom, the pair went to separate prayer sections for men and women.

While in the women's prayer section, Ms Noraini heard gunshots and quickly hid herself in a small storeroom, all the time terrified of what may be happening to her son.

Sayyad's cousin, Mr Khairul Ab Karim, 38, who lives in Singapore, told The New Paper that his aunt felt helpless and left their fates in God's hands.

In an interview with Berita Harian published yesterday, Ms Noraini, who has been living in New Zealand for more than 20 years, said: "I thought if the time has come for me to die, let it be."

Mr Khairul, who spoke to TNP yesterday, said he and his mother received updates from Ms Noraini on what happened.

According to her, she rushed out to look for her son once the gunshots ceased.

She told BH: "I did not see him. I only saw dead bodies lying stiff, bodies lying on top of each other. I was stunned, in disbelief that this is happening in New Zealand."

She left the mosque without knowing where her son was.

When Sayyad's parents went to the hospital at night and could not find their son, they had a feeling he had died. His death was confirmed the next day.

Sayyad was one of 50 people who died in the mass shooting at the Al Noor Mosque and the Linwood Islamic Centre in Christchurch last Friday.

The gunman, Brenton Tarrant, an Australian, has been charged with murder and is likely to face more charges.

Mr Khairul, a visual merchandising assistant manager, described his cousin as a quiet and well-mannered boy who was well liked and had wanted to become a professional footballer.

He said the two of them enjoyed each other's company whenever Sayyad came to Singapore.

Mr Khairul told TNP: "Even though we don't meet often, when he comes to Singapore it's like he has always lived here. The bond is super, super close."

Sayyad, who was born in New Zealand, had visited Singapore three times - his last trip here was for two months last December.

During these visits, Sayyad, his twin siblings, Shuayb and Cahaya, both 16, and his mother would stay with Mr Khairul's family in their three-room Housing Board flat in Telok Blangah.

Mr Khairul said: "They (the three children) are nature lovers. We would go to places like Sentosa, East Coast beach and MacRitchie TreeTop Walk. We would do a lot of outdoor stuff."

Sayyad also enjoyed eating nasi lemak but would avoid the sambal belachan because he did not eat seafood.

Mr Khairul said Sayyad was reluctant to return to New Zealand during his last visit to Singapore.

But Mr Khairul told him to finish his high school education in New Zealand and said he could come back to Singapore to continue his studies.

He agreed but insisted Mr Khairul visit him in New Zealand.

"I said yes and after that, my family wanted to surprise them with a visit this year," Mr Khairul said.

"As it turns out, I will end up visiting him at his grave."