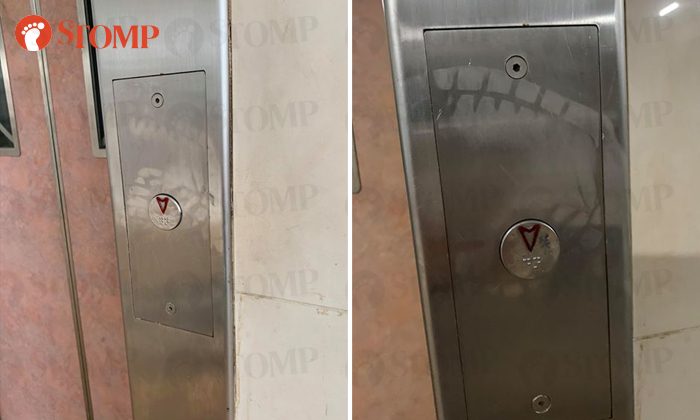 Submitted by Stomper Pissed Off

An inconsiderate neighbour has been stepping on lift buttons at Block 234 Hougang Avenue 1 to avoid having to touch them — much to the dismay of other residents.

Photos that Stomper Pissed Off took last week show dirty footprints left behind by the culprit.

The Stomper said: "Seriously, we don’t need neighbours with kampung spirit. No sanitisers, no toothpicks. This is fine. But why leave footprints on the lift buttons and panels?

"We have a selfish and inconsiderate neighbour who is extremely fearful of the coronavirus that he or she has to resort to using his/her feet to step on the lift buttons."

Pissed Off initially suspected that the culprit was an outsider. However, he has since noticed a pattern that led him to believe otherwise.

He told Stomp: "Initially, I thought the culprit could be anyone visiting the block, such as residents, visitors, deliverymen, etc.

"But I am pretty sure it’s a resident after noticing reoccurrences.

"The footprints always appear on the button of Lift B at Level 12's lift landing. You will also notice footprints on the number 12 button inside the lift.

"This has been happening for a few weeks already. You can imagine more footprints on the lift button panel inside the lift. How unfair is this to the rest of us using the lifts?!"

In response to a Stomp query, Aljunied-Hougang Town Council said it is aware of the issue and is working to educate residents against such inconsiderate acts.

A spokesman added: "In view of the COVID-19 situation, the town council has stepped up our cleaning and disinfection efforts around the estate, especially at 'high-touch' surfaces such as lift buttons."

According to The Straits Times, experts have yet to establish precisely how long the coronavirus can survive on surfaces and objects.

Some studies show that coronaviruses in general could potentially survive on metal, glass or plastic surfaces for several days.

However, this is under ideal circumstances, meaning a cool and dry environment for the virus.

The best way to avoid infection from having potentially touched a contaminated surface is to refrain from touching your face with your hands, as well as to wash your hands with soap and water frequently.