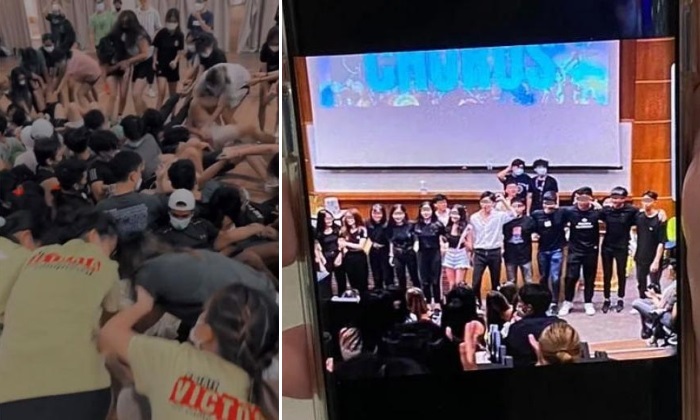 Students attending orientation programmes hosted by the National University of Singapore (NUS) have alleged that safety precautions were lacking at the events.

A 19-year-old female student who attended a hall engagement camp at NUS told TNP that safe management measures were not enforced by the camp organisers.

The student, who wished to remain anonymous, said that some participants removed their masks while indoors, with more participants following suit after they participated in the various programmes.

While she does not know if the alleged breaches have led to any students getting Covid-19, she was concerned that some camp facilitators went against the guidelines set by the school administration.

According to Shin Min Daily News, more than 20 students tested positive for Covid-19 after attending an NUS Business School orientation camp from June 15 to June 17.

Another 19-year-old student told TNP that she decided not to attend a hall engagement camp after signing up for it, for fear of catching Covid-19.

This was after she had seen videos circulating on social media that showed camp participants of other NUS camps not wearing their masks and intermingling in large groups.

In a photograph she showed TNP, a large group of participants from the NUS Sheares Hall engagement camp were not wearing masks while in close proximity to one another.

The student also showed TNP a video of students out clubbing after the first day of NUS Kent Ridge Hall’s programme, which was allegedly organised by the hall’s camp facilitators. In the video, individuals are seen without masks.

According to a second-year student at NUS, camp facilitators were not authorised to organise gatherings and parties outside of the stipulated orientation time on campus.

"All this after-party nonsense is exactly how Covid-19 is spreading,” she added.

In a statement sent to The Straits Times on June 7, pertaining to in-person orientation activities returning after two years of Covid-19 curbs, NUS dean of students, Professor Ho Han Kiat, said orientation programmes would be closely guided by prevailing SMMs.

He said: “Prevailing SMMs such as indoor mask-wearing will be in place during orientation activities to keep our campuses safe.”

TNP has contacted NUS for comment on the matter.