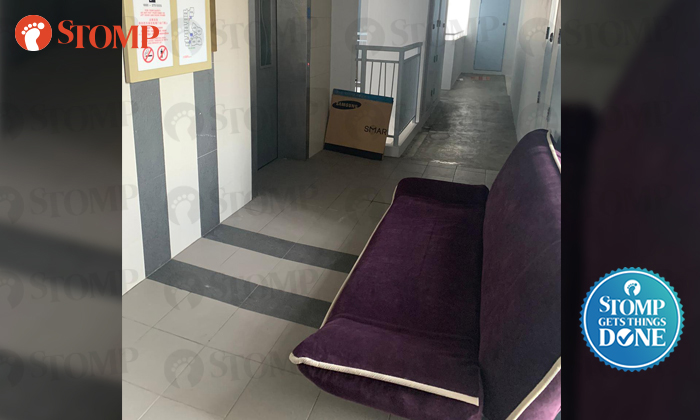 A sofa left at the lift landing of Block 181B Boon Lay Drive has been removed following feedback from a Stomper residing there.

Stomper Anonymous said he first noticed the sofa and a cardboard box at the eighth-floor lift landing on Dec 27.

Speaking to Stomp on Jan 3, Anonymous shared: "I was on my way home at around 6pm when I saw the sofa and the cardboard box packaging for a television.

"They were there every day for at least a week.

"The box was later cleared away but the sofa is still there.

"New families moved into two units here recently, so I believe the items belong to one of them.

"I did not contact the town council as I want to see how many things they put there. Maybe they want to install a television or minibar there too hahaha."

Anonymous told Stomp on Monday morning (Jan 6) that the sofa was still at the lift landing.

In response to a Stomp query, a spokesman for West Coast Town Council said on Tuesday (Jan 7): "The sofa at the lift landing has been removed by our conservancy workers on 6 Jan 2020."