"So what if you're Singaporean?" Crowd intervenes after drunk man allegedly tried hitting uncle with beer bottle 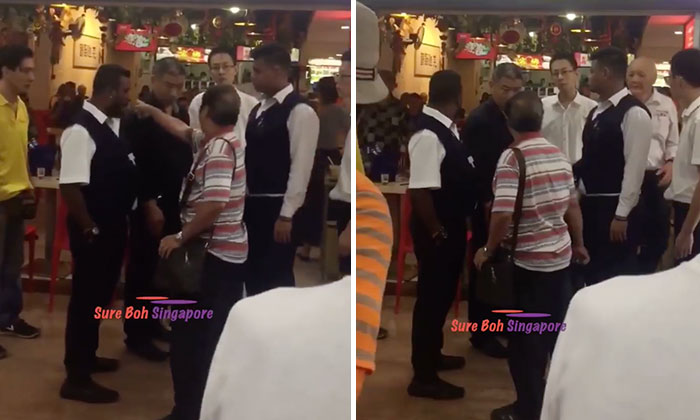 A drunk man allegedly tried to club another food court patron who asked him to keep his volume down.

The incident happened in a food court at People's Park Complex on Sept 5, around 2pm.

The 79-year-old patron who was almost assaulted told Shin Min Daily News that the belligerent man had downed four bottles of beer prior to the altercation and was talking loudly.

“I couldn’t put up with it anymore so I asked him to lower his voice.

“I didn't expect him to flare up.

“He started shouting at me, before going back to his table.

“He suddenly grabbed a beer bottle and charged towards me.

“I took about five to six steps back.

“He struck the table with the bottle.

“Some passers-by stepped in to intervene.”

The septuagenarian revealed that he had grabbed a chair to defend himself, while bystanders intervened.

The manager of the food court also attempted to mediate the situation.

A video of the incident was posted on Sure Boh Singapore’s Facebook page.

In the video, the drunk man, in a striped shirt could be heard shouting at a group of men, while bystanders crowded around to observe the debacle.

A voice could be heard saying in Chinese:

“So what if you’re Singaporean?”

The drunk man retorted by accusing another man of hitting him.

An individual within the group then suggested calling the police.

His suggestion was met with fierce protest by the drunk man before he walked off.

It is unclear what happened after.

Related Stories
Man arrested at Marsiling Drive after threatening to blow up flat -- while locking himself inside
Wa piang, you anyhow cut in front of moving car but still dare to show middle finger
Police report made after men shout at and threaten to "hammer" Singapore Customs officers
More About:
drunk
food court
People's Park Complex
dispute