So sweet! 'Uncle Philip' from NTU's KFC gives lovely handwritten note to students with every order 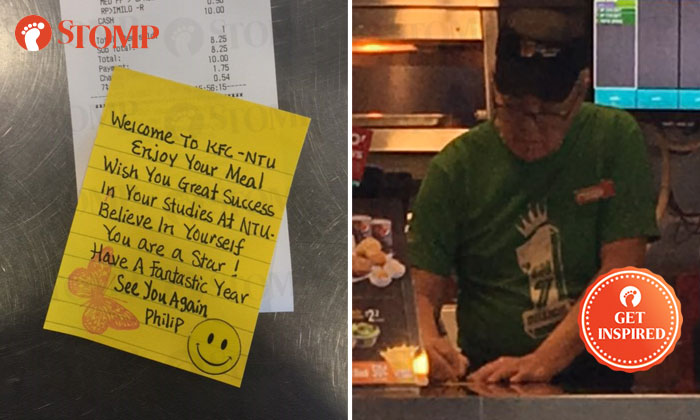 In this digital age, a handwritten note means a lot, especially when it is one of encouragement.

Stomper Adam was touched when a cashier, known as Uncle Philip, at the Nanyang Technological University's (NTU) KFC outlet gave him a special message together with his order on Thursday (Aug 2).

In the note, Uncle Philip wished Adam "great success" in his studies and reminded him to believe in himself and that he was a star before wishing him a fantastic year ahead. 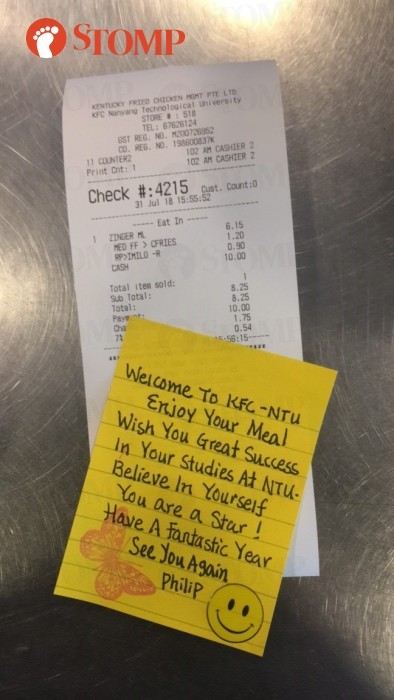 Adam told Stomp that he noticed that Uncle Philip was giving out these notes to most of the students who dined at KFC.

"This is actually the second time I have received a note from him," said Adam.

"I received my first one earlier this week on Tuesday (July 31)."

Adam observed that Uncle Philip took the time to write these encouraging notes when he was free and there were no customers to serve.

"I want to thank him for doing something so different," said Adam.

"He is the only cashier at the outlet giving these out.

"Although it seems like a small gesture, it's really rare to come across service staff who go the extra mile in their work.

"He deserves a Stomp Goody Bag to encourage him to keep up his passion for his work."