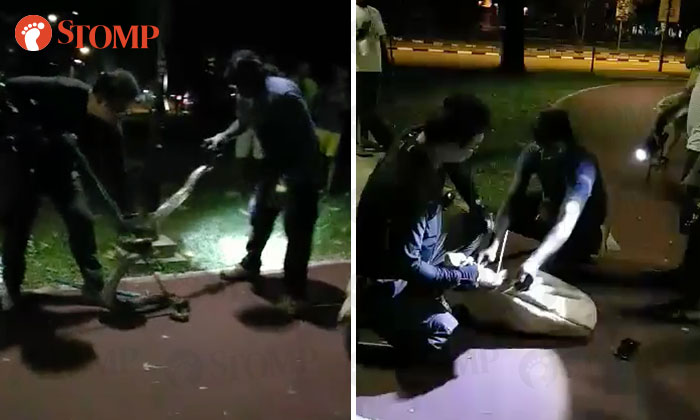 The Agri-Food and Veterinary Authority of Singapore (AVA) is investigating claims by Animal Concerns Research and Education Society (Acres) that its officers handled a reticulated python inappropriately while removing it from a footpath near Block 187 Boon Lay Drive on Tuesday night (July 24).

A Stomper was in the vicinity and alerted Stomp to the incident.

The Stomper, who works as a Land Transport Authority (LTA) enforcement officer, told Stomp in a phone interview that he was working at a carpark near the block at around 11pm when he spotted a group of people at a pathway nearby.

He went over and realised that there was a 2m-long python on the ground.

The Stomper said: "I spoke to some of the people in the group. Many of them were residents from the blocks nearby.

"A man told me that a foreign worker had been the first one to see the snake.

"The group followed the snake because they were afraid that the snake might escape."

According to the Stomper, the worker was the one who alerted the authorities, and officers from the AVA were dispatched to remove the snake. 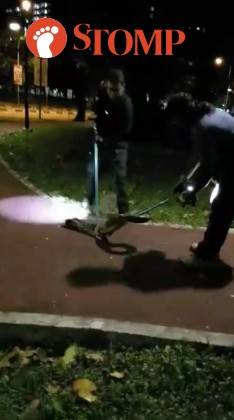 The process took about 40 minutes and concluded at around midnight, he said.

The Stomper also took a video which he sent to Stomp.

In the videos, the AVA officers are seen attempting to catch the snake. The snake escapes from the footpath and onto the grass patch, before slithering into a drain nearby.

The two officers finally managed to subdue the snake, bringing it back onto the footpath, before placing it in a bag.

When Stomp approached the Acres for a response on the incident based on the video taken by the Stomper, Deputy Chief Executive Mr Kalai Manan said: "This reticulated python was not handled by Acres. The snake, however, was very poorly handled.

"The person holding the head of the snake shows little or no care for the animal he's holding, aggressively jerking the head when the pythons teeth got stuck in the sack.

"The snake should have lost a few teeth. Both handlers don't seem to know what they are doing also.

"We can only hope the snake did not get injured in the process and I urge the authorities to look into this case. Handling animals requires patience and passion. If you see a wild animal in distress, please do call the ACRES hotline at 97837782."

In response to a Stomp query, a spokesman from the AVA said: "On July 24, AVA received feedback on a snake sighting near Block 187 Boon Lay Drive. Due to public safety, the snake was removed and is now in the care of Wildlife Reserves Singapore.

"AVA advises the public not to approach, disturb, feed or try to catch any wildlife, including snakes.

"Keep a safe distance from the animals and avoid confronting or cornering them. Do not interact with the animals, and ensure that young children and pets are kept away from them.

"The public can refer to the advisory on snakes on our website, and contact AVA at 1800-476-1600 to provide feedback or request for assistance."

With regard to claims that the snake was handled poorly, the spokesman told Stomp: "AVA is investigating the alleged inappropriate handling of the snake."