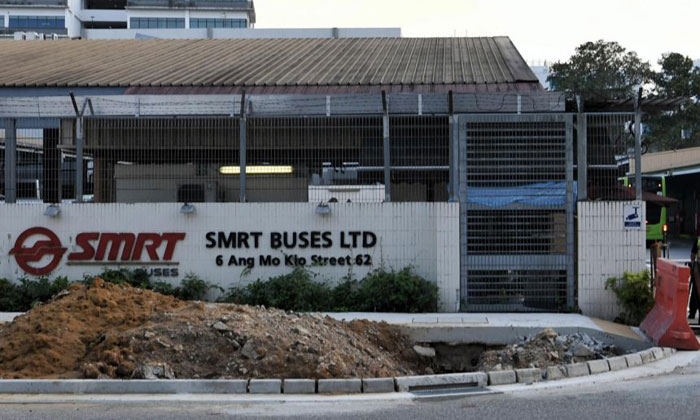 One SMRT technician was killed and another injured when a car jack supporting a bus they were working on gave way on Sunday (June 6) morning.

Police told The Straits Times they received a call at around 9.40am on June 6 asking for assistance at 6 Ang Mo Kio Street 62 - the address of SMRT's Ang Mo Kio bus depot.

A 44-year-old man was conscious when taken to the hospital, a police spokesman said.

Another 43-year-old man was unconscious, and subsequently died from his injuries at the hospital.

The two technicians were taken to Khoo Teck Puat Hospital in Yishun, said the Singapore Civil Defence Force. One had serious head injuries, while the other complained of chest pains, it added.

Responding to queries, SMRT’s general manager for automotive services Venkatesan P V said the two staff were injured while repairing "a minibus" at the depot.

He added that the company is providing help and support to the family of the employee who died. The other injured staff has been discharged and is on medical leave.

A stop-work order has been issued to the Automotive Services commercial repair centre at Ang Mo Kio Depot, while the other automotive workshops conducted a safety time-out to emphasise workplace safety, Mr Venkatesan said.

SMRT is assisting the Manpower Ministry and police with investigations.

According to an alert issued by the Workplace Safety and Health Council on Wednesday, the technicians were working under a bus which was raised using two car jacks. The bus fell on the workers when one of the jacks collapsed.

The council said such accidents can be prevented if proper vehicle-jacking equipment designed for the load of the vehicle being raised was used. In other words, do not use car jacks, which are designed to support a fraction of the weight of a bus.

It added that jacks must be secured, and additional stands or props should be used to “provide additional support when lifting heavy vehicles like buses, trucks and lorries”.

“Where available, use a vehicle maintenance pit or purpose-built vehicle ramp or lift to safely access the bottom of a vehicle,” the council stated.

A separate fatal incident took place last Thursday, when a worker died from his injuries after a wheel loader used to transfer gravel and sand reversed and hit him. The council said a working rear-view mirror was installed on the wheel loader, but its warning beacon and reverse alarm were not working.

There were 14 workplace deaths between January and April this year.

Sunday’s incident is the second workplace fatality for SMRT in two years. In March 2020, one of its technical officers died while working at Bishan Depot. He was hit in the face by a 5kg rod that flew out from a piece of heavy equipment.

Mr Muhammad Afiq Senawi, then 30, was operating a hydraulic press machine when a spacer rod flew out of the machine, broke through fencing and hit him in the face.

These incidents followed other serious worksite mishaps. On March 22, 2016, two trainees - 24 and 26 years old - were killed on a track near Pasir Ris station.

And on Dec 12, 2018, a 59-year-old worker had his right foot amputated after it was crushed by a maintenance train.

While the rail fatalities were found to have been caused by a failure to impose safety protocols, the cause of the latter has not yet been made known.

SMRT chief executive Neo Kian Hong had said then that a board of inquiry into the incident had been convened.

Commenting on Sunday’s incident, executive secretary of the National Transport Workers’ Union (NTWU) Melvin Yong said the union was “deeply saddened by the sudden passing of an SMRT Automotive Services worker due to a workplace accident”.

“Our union leaders are in touch with his family to render the necessary assistance and support,” said Mr Yong, who is also deputy chairman of the Government Parliamentary Committee for Transport. “The union has also provided a token sum to assist the family through this trying period.”

He added that NTWU is also “working closely with the company to render assistance and support to another worker who was injured in the same incident”.

Related Stories
14-year-old cyclist killed in Marina East accident with trailer had wanted to be a cop
Motorcyclist, 63, dies from injuries after accident with trailer at Penjuru Road junction
'I never expected to take him back as a dead body': Mother of worker who died in PIE accident
More About:
SMRT
death
fatal
accident
fatal accident
workplace accident