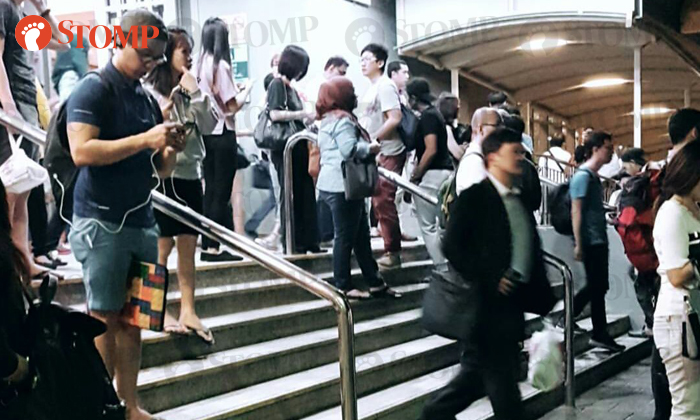 Train service on the eastbound stretch of the East-West Line (EWL) was halted from 11.15pm until the end of service after a series of train faults yesterday night (Nov 10).

Stomper Marianne said her son was told to alight at Aljunied MRT Station at around 11.50pm, when he was on his way home to Pasir Ris from work.

SMRT announced in a statement posted past midnight today (Nov 11) that a train travelling eastbound on the EWL had registered a fault near Outram Park station at 9.40pm.

Another train was immediately sent to haul the defective train out of service.

SMRT said: "As the coupled trains were travelling towards Changi Depot, they stalled near Paya Lebar MRT station and were unable to proceed. Another train was deployed to move these trains."

Free bus services and bridging bus services were also immediately made available between Bugis and Pasir Ris MRT stations in both directions.

"We are sorry that your journey this evening has been affected," SMRT added.

Delays on the EWL were first reported when SMRT tweeted at 9.53pm to warn commuters about an additional 30 minutes' travel time on the westbound stretch from Bugis to Queenstown.

The eastbound stretch from Tiong Bahru to Pasir Ris was then hit by delays twice that duration over an hour later.

SMRT subsequently announced that train service was unavailable on the eastbound stretch from Bugis to Tanah Merah due to a fault at Aljunied station.

According to SMRT, the faults were not related to the ongoing signalling project.