SMRT makes police report after man forced his way onto train with bicycle, hung it on grab poles 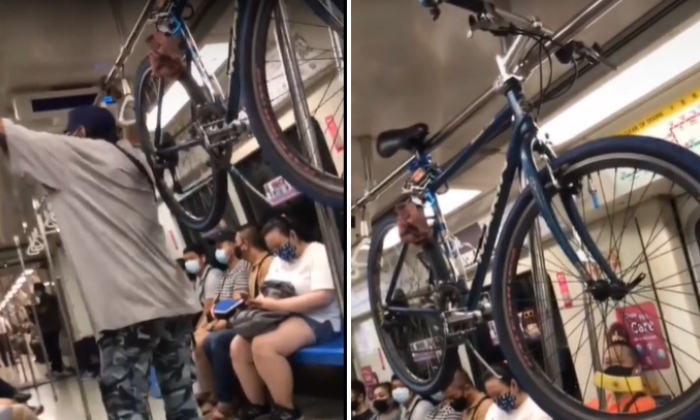 SMRT has made a police report after a commuter forced his way onto a train with a full-sized bicycle on Tuesday (Dec 15).

A video showing the man shouting curse words at other commuters while his bicycle hangs precariously from the grab poles made its rounds on social media, amassing more than 150k views on TikTok.

In the video, the man can be seen leaning on the pole as he hurls vulgarities in English, Malay and Hokkien at other commuters.

His full-sized bicycle hangs dangerously from the grab poles by its handlebar and saddle.

The other commuters on the train look down and appear undaunted by the man yelling.

SMRT put up a statement on Facebook regarding this incident on Wednesday (Dec 16).

Some of you may have come across a video that is circulating online about a commuter with a bicycle on board a train....

According to the statement, an SMRT staff tried to stop a male commuter with a non-foldable bicycle from entering the train at Woodlands station on Tuesday (Dec 15) at 7.10pm.

"The male commuter was uncooperative and forced his way into a north-bound train. The commuter subsequently transferred to a west-bound train at Jurong East station and exited at Pioneer station at about 7.50pm," said SMRT.

SMRT added that they have since identified the commuter and made a police report.

"For the safety and comfort of all commuters, we would like to remind everyone to observe regulations when bringing foldable bicycles and personal mobility devices on board trains and buses," said SMRT.

According to the Land Trasnsport Authority (LTA), commuters are allowed to carry foldable bicycles and personal mobility devices on board public transport at all hours of the day.

However, the foldable bicycles and personal mobility devices must be within the dimensions of 120cm x 70cm x 40cm.

Related Stories
Drunk man who verbally abused MRT staff, dared them to call police and refused to wear mask arrested in Yishun
Man hurls vulgarities at MRT staff, challenges them to call police: 'Why must I go out? I pay money leh'
Police report made after man hurls abuse and spits at SMRT bus captain near Tekka Centre
More About:
SMRT
aggressive
rude
train
MRT