SMRT bus captain of 20 years lauded as 'the best' in viral FB post, opens up about his job 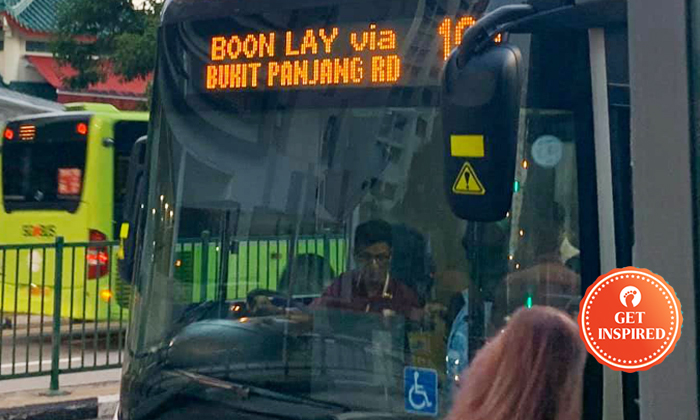 An SMRT bus captain who was lauded for performing his duties with a personal touch and going the extra mile has opened up to Stomp about his job.

Facebook user Lee Yue Heng had commended the bus driver in a post on March 3 and said: "He drives Bus 187 in the morning and reaches my stop in Bukit Batok at around 7am."

Lee, a teacher at Crest Secondary School, said that the bus captain not only greets everyone who boards his bus, but makes small talk with passengers during the journey too.

Lee also cited an incident where he noticed an elderly man with a cane walking slowly towards the bus and told the bus captain to wait for the man.

"My request was not necessary," recounted Lee.

"'That is my regular,'" the bus captain said. He was not going to leave without his regular."

Not only does the bus captain drive in a "safe and steady" manner, he also watches out for everyone on board.

Lee said: "This is the only bus captain I have seen who calls out 'Road Turning!' to the passengers when he swerves his vehicle. He does this for EVERY road turning, to make sure those standing do not lose their balance."

The bus captain even greets students on his bus by wishing them good luck and telling them to study hard, said Lee.

He added: "In Chinese, there is a saying 敬业乐业 (to respect one’s job and derive joy from it). This bus captain is really 敬业乐业!"

Many netizens who have taken the same bus service shared equally heartwarming encounters with the bus captain.

Lee wrote in his post: "I don’t know his name, but this gentleman is the best bus captain I have ever met."

Well, wonder no more: Stomp has identified the bus captain as Mr Tham Weng Foo, who has been in his role at SMRT for 20 years.

Asked why he performs his job with such dedication, the 52-year-old Singaporean shared: "When I first joined the industry, I found the trial period a little challenging.

"However, I realised that working this job is an opportunity to help myself, and my mentor encouraged me to smile and bring positive thoughts to work.

"I then noticed that smiling and greeting my passengers went a long way in getting them to warm up to me, and a few years later I received a commendation letter that encouraged me to keep going.

"I have received praises in person as well, and I want to continue serving my passengers to give them a good journey."

Of course, Mr Tham's job is not without its challenges.

He told Stomp: "Some passengers who are in a rush try to ask me to drive faster, but unfortunately I cannot do that safely.

"Even though they might get agitated, I try to understand their situation and do my best to appease them."

Mr Tham also recounted a memorable encounter he had with a primary school student.

He said: "The young boy came up to me to say, 'Uncle, today is my birthday.'

"I didn’t have anything on-hand except some biscuits, so I hurried to give them to him and he was very happy.

"I think a small thing like that probably meant a lot to somebody else, and I hope that student remembers me when he grows up."

Thank you for bringing smiles to us all, Mr Tham!