Smoker unzips pants to pee in front of woman's car, says it's 'urgent' when caught red-handed 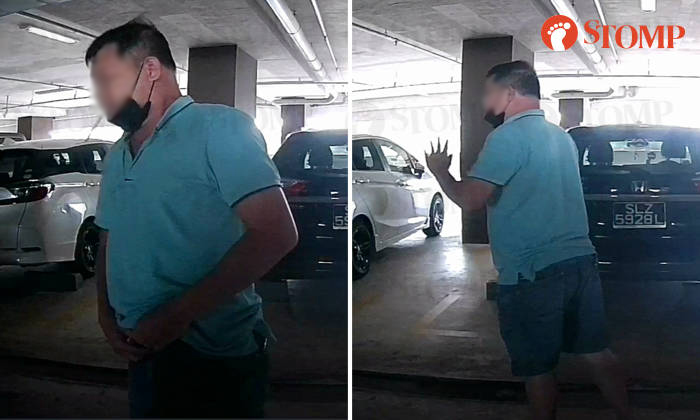 A man answered the urgent call of nature by urinating right in front of a woman's parked car on Monday morning (Jan 25).

The incident occurred at the Level 5 carpark of the Nordcom I building at 3 Gambas Crescent.

Stomper Lingg, the owner of the affected car, shared dashcam footage of the disgusting act that took place at around 10.40am.

She also caught the man, who had parked his own car in front of hers, red-handed.

Lingg told Stomp: "I caught this man peeing in public when I was returning to my car. His mask was off and he was smoking too.

"I shouted 'Oi!' at him to stop but he ignored me until he was done. He then claimed that he was urgent. When I told him that the toilet is just next to the lift landing, he said it was his first time at this place.

"Despite what he said, he can still choose to pee at other people's car and not at his own! He is just being inconsiderate and unhygienic.

"He tried to take a 500ml bottle of water to rinse the pee away after being caught red-handed.

"I felt disgusted by this man and drove off immediate as I needed to fetch my toddler from class. I wonder how many rules/laws this man has broken in these two minutes."

Lingg said she subsequently reported the matter to the management of the building as well as to the relevant authorities.

She added: "In times of Covid-19, we should be taking cleanliness and personal hygiene even more seriously. What the man did is totally unacceptable. He is spreading germs and bacteria.

"I hope the relevant authorities can do something about it."

Related Stories
Man caught peeing just outside MBS: "It's such a shameful act"
Man pees by roadside at Punggol Way when toilet is just around the corner
Man attends to 'urgent business' -- by squatting down to defecate at bus stop
More About:
peeing
disgusting
unhygienic
inconsiderate
carpark