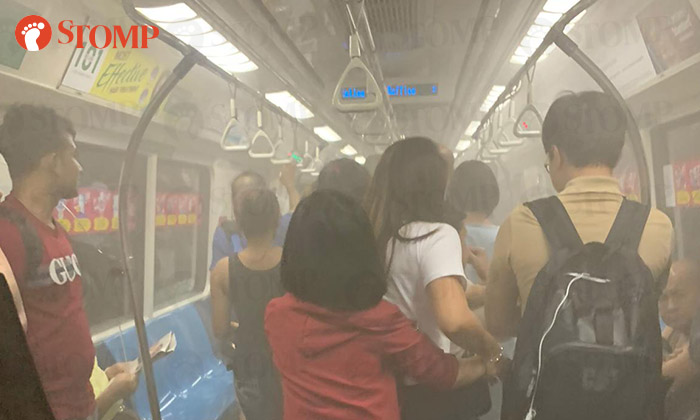 Smoke seen on a train at the east-bound platform of Raffles Place MRT station at about 12.45pm on Friday (Jan 10) was due to leaking air-conditioning compressor, said SMRT Corporation.

Stomper Ee Chien alerted Stomp to the incident and contributed photos of what he saw.

He told Stomp: "I boarded a train on the green line at Tanjong Pagar MRT station at about 12.30pm and alighted at the next stop, Raffles Place station.

"I can't tell if it was a fire but I didn't want to linger around, plus I had to go for lunch.

"I just didn't want to stick around in the smoke."

"While on the way to Raffles Place station, I noticed smoke.

"Everyone seemed a bit uncomfortable and I could smell the smoke.

"All the passengers alighted at Raffles Place station and I heard an announcement saying that the train was going to stop here.

"I got off the train and switched to another one on the North-South line to continue my journey."

In response to a Stomp query, Chief Communications Officer of SMRT Corporation Ms Margaret Teo said: "On Friday (Jan 10) at around 12.45pm, white smoke was seen coming from a train at the east-bound platform of Raffles Place MRT station.

"As a safety precaution, all commuters on board the affected train were asked to disembark and board the next train.

"The affected train was withdrawn from service for further checks.

"We have confirmed that the smoke emission was due to a leaking air-conditioning compressor that released Freon gas.

"We apologise for affecting your journey.”

According to an earlier report on The Straits Times, Freon gas is "a common refrigerant used in air-conditioners - is non-toxic, but interacts with moisture in the air to form an odourless white smoke.

"However, prolonged exposure to the gas, especially when it is inhaled deeply, can cut off oxygen to the cells and lungs."