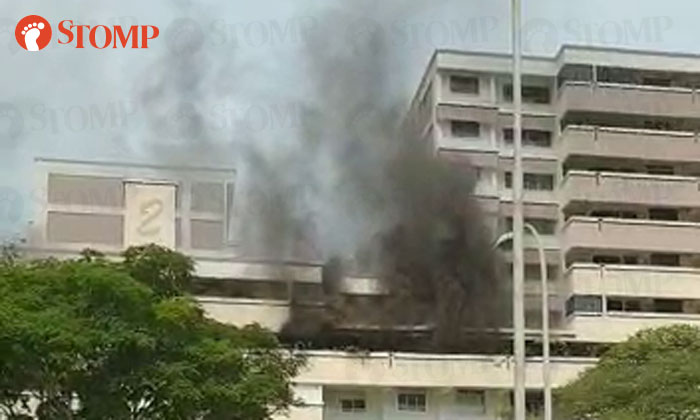 A fire broke out in the bedroom of a unit at Block 204 Serangoon Central on Tuesday afternoon (May 14).

The Singapore Civil Defence Force (SCDF) told Stomp that the entire sixth-floor unit sustained heat and soot damages as a result of the fire.

Stompers Patrick and Asybiel alerted Stomp to the fire and shared videos taken from the front and back of the block.

Billows of smoke were seen coming from the unit and spreading along the common corridor.

In response to a Stomp media query, SCDF said it responded to the fire at about 3.30pm.

"The fire involved the contents of a bedroom of a unit on the sixth floor," an SCDF spokesman said.

It was extinguished by SCDF using one water jet and one compressed air foam backpack.

"Occupants of the unit self-evacuated prior to SCDF's arrival and about 30 persons were evacuated by SCDF and the Singapore Police Force (SPF) on the sixth and seventh floors," the spokesman said.

"No injuries were reported, however, an elderly woman was assessed by paramedics and conveyed to Tan Tock Seng Hospital as a precautionary measure as she complained of dizziness and breathing difficulties."