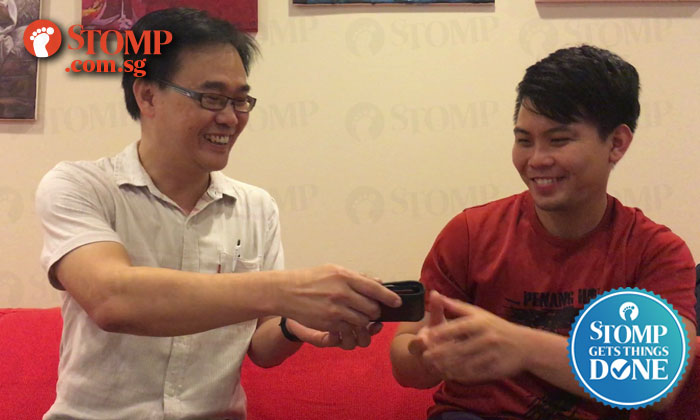 The man who lost his wallet in front of Hougang Primary School has been reunited with it after Stomp connected him with the Stomper who found it.

Steven Ng, who works for the Land Transport Authority (LTA), was conducting a traffic equipment inspection when he found the wallet along Hougang Street 93 yesterday (Jan 9).

Having lost his valuables before, Steven knew that the owner of the wallet must have been anxious and wanted to return it to him as soon as possible.

After failing to find the owner of the wallet on Facebook himself, he turned to Stomp.

"I thought of Stomp and its fast and efficient social media platform that could help me return this wallet to its owner."

The post was put up within an hour of him informing Stomp, and the owner of the wallet was found just three hours after that.

"I was shocked that Stomp was able to find the owner within such a short time frame," exclaimed Steven.

Edwin Hoo, 27, was alerted to the Stomp report by his friend.

He shared how overcome with emotion he was and thankful that somebody had found it:

"I actually gave up on hoping that somebody would return the wallet to me because to be honest, it contained quite a sum of money.

"To me, the wallet held greater sentimental value because it was a gift from my fiancée.

"When my friend called me about the Stomp report, I jumped out of bed and was so happy that somebody had come forward to return the wallet via Stomp."

Stomp arranged for the duo to meet at our office today (Jan 10) so that Steven could return the wallet to Edwin in person.

Edwin was overwhelmed with gratitude and even brought gifts for Steven that included Chinese New Year goodies, chocolates and an ang bao.

Steven told him he should not have gone through the trouble but after Edwin insisted, he accepted the presents graciously.

Edwin also wanted to respond to some netizens' comments questioning why Steven had not just handed the wallet over to the police instead:

"It's actually better that he reached out to Stomp because if he had approached Hougang Neighbourhood Police Post, it would probably have taken a few days before they would have got in contact with me.

"I was just about to make a new National Registration Identity Card (NRIC) and driving licence today.

"It's good that through Stomp, we can recover the wallet faster."

The two left Stomp's office together all smiles and even took a selfie together.

Steven commended the Stomp team and thanked us for making this a "happy moment for everyone".

Related Stories
Help! Have you seen my wallet containing my work permit and ID I lost at Khatib MRT station?
Woman gets PAssion Card back: She did not know it was lost till she saw Stomp report
How Stomp has made a difference in people's lives
inspiring
get inspired
heartwarming
Stomp gets things done
lost
lost wallet