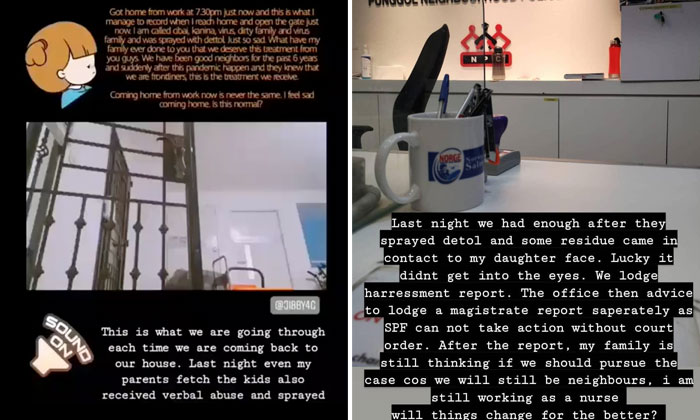 The police are investigating a case regarding a Sengkang General Hospital (SKH) nurse who has been enduring harassment from his next-door neighbours, including mocking and being sprayed with disinfectant.

The male nurse, who goes by @jibby4g on Instagram, had posted a series of videos and an account of what he and his family has been experiencing ever since the outbreak of Covid-19 in Singapore.

His wife is also an essential worker.

In his original post, he said that he has enjoyed a good relationship with his neighbours for the past six years but "suddenly, after this pandemic [happened], they knew that we are frontliners (sic) and this is the treatment we receive".

In one of the clips, one of his neighbours is heard repeatedly shouting "virus" at him as he returns home from work.

In another clip, his neighbour is seen spraying what appears to be disinfectant at the doorway.

In one instance, the nurse's daughter is seen covering her face when returning home in apparent fear of being sprayed.

He wrote in one of his captions: "What [happened] to 'clap for frontliners' and the song Home?? This is the [reality] frontliners [are] facing now."

According to him, his neighbours have also shouted profanities at him and his family. Even his parents were not spared from being shouted and sprayed at whenever they come over to fetch his kids.

The family had the last straw when his neighbour allegedly sprayed Dettol disinfectant at his daughter's face.

He wrote that it was fortunate the solution had not gotten into her eyes.

He added that he made a harassment report and was advised to make a magistrate report separately.

He said: "After the report, my family is still thinking if we should pursue the case cos (sic) we will still be neighbours, I am still working as a nurse, will things change for the better?"

SKH posted a statement on Monday afternoon (May 18) that they were aware of the video circulating online posted by one of its nurses.

"SKH takes a serious view of this incident," it said.

"Our medical personnel work hard to provide the care our patients need, especially during this time when the world is grappling with the COVID-19 pandemic.

"They deserve consideration, respect, and a safe environment both at work and at home so that they can continue giving their best.

"We are currently providing our staff with support during this challenging time.

"We ask for members of the public to respect our medical personnel.

"Let us come together during this unprecedented time.

"We would also like to take this opportunity to remind members of the public that cases of physical or verbal abuse of our healthcare staff will be reported to the police for follow-up."