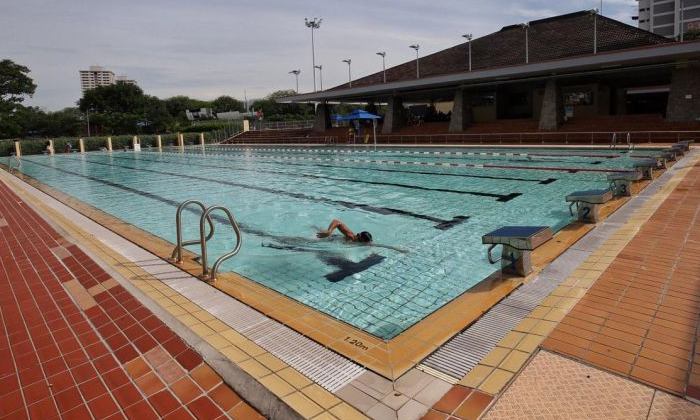 The state coroner criticised two lifeguards and a swimming instructor after a six-year-old girl, who did not know how to float or swim independently without support, died following a near-drowning at Kallang Basin Swimming Complex.

On Dec 20, 2017, little Sherlyn Ler was left to fend for herself for at least four minutes as she swam using a swimming board.

Her instructor, Mr Yeo Chwee Chuan, had led her to the pool's mid-point during her 7pm lesson before allowing the girl to swim to the edge.

But he then turned away to focus on his other students, aged six to eight years old.

Of the two lifeguards near the teaching pool, one was busy on his mobile phone while the other spent time arranging chairs.

In an inquiry into her death on Tuesday (April 2), State Coroner Kamala Ponnampalam said: "The lifeguard should not be distracted by the use of his personal devices or idle chit-chat.

"He should never leave his post unguarded. Drowning is known to occur quickly and quietly between 20 and 60 seconds."

She also noted several lapses in Mr Yeo's management of his lesson, saying his class formation was "poor".

"At several points in time, more than one student was out of his line of sight... Ideally, the child, especially one who is not an independent swimmer, should be within arm's reach," added the state coroner, who found Sherlyn's death a tragic misadventure.

Although the girl's mother was seated on a nearby platform to keep an eye on her daughter, she too became distracted by her phone and when she turned to speak to other people.

Moments after Mr Yeo turned his back, the 1.11m tall Sherlyn went under in a pool where the water's depth was between 0.8m and 1m.

She died in hospital on Jan 9 last year from a lack of oxygen and blood flowing to the brain following the near-drowning.

The Straits Times understands that Mr Yeo's coaching licence has been suspended by Sport SG and Mr Firdaus Rajatmarican and Mr Law Kum Wah, who left the pool unattended for at least four minutes, are no longer lifeguards.

It emerged at the hearing that at 7.05pm, Mr Firdaus, who had been watching over the training pool, asked Mr Law to take over his duty as he needed to use the washroom.

The state coroner said that closed-circuit television footage showed Mr Firdaus looking at his phone while Mr Law was arranging some chairs in the area.

At about 7.15pm, two girls in the pool noticed Sherlyn floating face up and alerted Mr Law.

Mr Law and Mr Yeo swam towards the girl and cardiopulmonary resuscitation was performed on her.

Paramedics arrived at the swimming complex& at around 7.30pm and she was rushed to Tan Tock Seng Hospital, before being transferred to KK Women's and Children's Hospital the next day.

State Coroner Kamala said that according to Mr Garett Lim, who is a trainer of the Swimsafer programme at Sport SG, Sherlyn should not have been left to swim alone.

She was about 10m from her coach when the incident happened.

Mr Lim also said the swimming board is a poor flotation device which is not stable and may float away, leaving the child unaided.

The state coroner added: "Children, in particular, need constant supervision around water which cannot be done if the coach is not able to see them."

Sherlyn's family members were in court on Tuesday but they declined to comment.