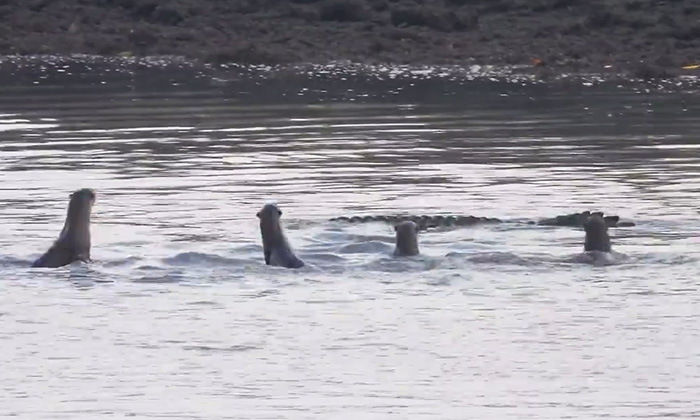 A group of otters were caught on video fending off a crocodile in the waters of Sungei Buloh Wetland Reserve.

The video was uploaded to Facebook page Ottercity on Sunday (Sep 9) and has garnered more than 21,000 views and 50 comments.

The video shows a group of six otters bobbing up and down in the water near a sand bank.

A few moments later, a crocodile can be seen lurking towards the group.

The otters circled around the crocodile, before it suddenly snapped at them.

This appeared to do very little to frighten the otters, however, as they carried on circling the crocodile while bobbing up and down in the water.

The crocodile snapped at them again, but again it did very little to faze the otters.

The video ends with the crocodile out of sight and the otters swimming back to the sand bank.

According to The Straits Times, the video was captured by veteran otter watcher Mr Jeffery Tan, who has been observing wildlife at Sungei Buloh for around 15 years.

He said the whole incident lasted about 10 minutes before the crocodile swam away.

"While crocodiles can be hard to spot sometimes, you can (detect) their presence by the reactions of otters and monitor lizards," he said.

"They will be on alert when they sense a crocodile."

Mr Tan also mentioned that he has seen similar encounters at least five times in the past few years.

Head of OtterWatch group and National University of Singapore (NUS) biology lecturer N. Sivasothi said that the reason otters bob up and down in the water is to monitor their surroundings above the water in order to be aware of threats like, in this case, crocodiles.

This action is called periscoping.

"Otters and crocodiles, both fish eaters, are unable to drive each other out of an area so they have to co-exist," he said.

"From time to time, they will encounter each other.

"Otters, being the more agile and busy species, are the ones which will initiate contact with a crocodile."

Mr Teo also estimates that Sungei Buloh is home to two otter families, and they have been spotted fighting with feral dogs and monitor lizards.

He identifies the crocodile in the video as Tailless, a well-known crocodile to nature watchers.

The crocodile is named as such due to the fact that it has a stump where its tail should be.

He further added that Tailless had been in the reserve for at least 12 years, and he has noticed it since it was a baby crocodile.

He also mentioned that Tailless and other crocodiles in the reserve have emerged victorious in some encounters with other animals in the past, despite the otters having strength in numbers.

"There is not really a clear winner every time, it depends on which family of otters is involved and the strength of the otters," said Mr Teo.