Sitting at Tampines Swimming Complex? Someone's feet might have gotten there first 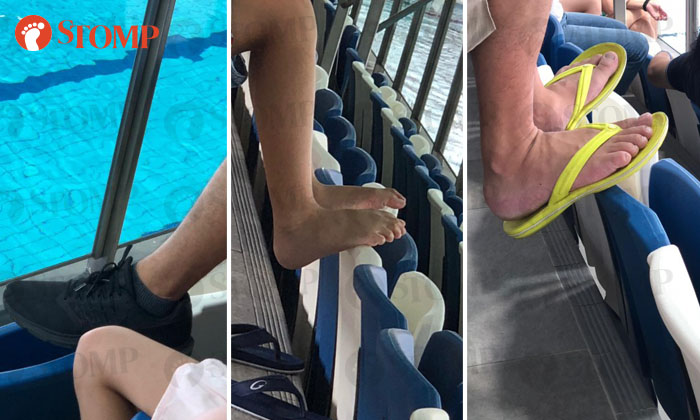 Dora took pictures of the incidents last Friday (Nov 30) and last Sunday (Dec 2), when she went to watch her children take part in a water polo competition.

While she was sitting down watching the match on Friday, she saw many people in the spectator seats resting the soles of their feet on the chairs in front of them.

She said: "They may be putting their feet up because the sitting area is cramped, however, I think that it is rather unhygienic to do so.

"I used to sit in the front row to watch matches, but after seeing all the feet up on Friday, I sat in the back row on Sunday."

The Stomper said that her children had put their feet up on the same seats before, but she told them not to do so as it was inconsiderate to the person who may be seated there next.

"I think that there should be more etiquette lessons in school, to ensure that people are more educated on how to behave in public."

Related Stories
Man pees in bushes along Upper Circular Road in wee hours of the morning
Youths open sealed products, dip fingers in to taste and put them back on supermarket shelf
It's raining sanitary pads on roof of sheltered walkway in Clementi
More About:
unhygienic
Tampines