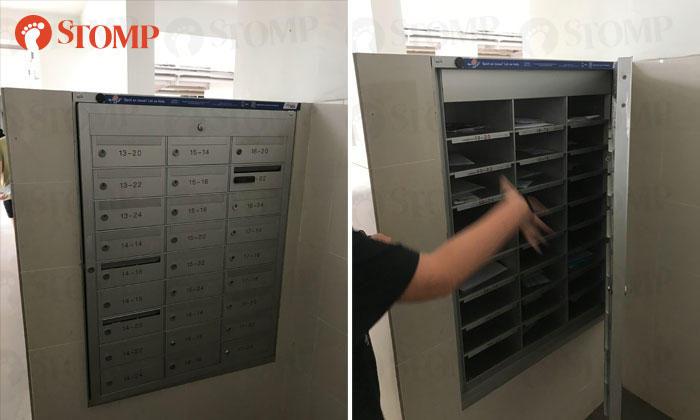 SingPost told Stomp it is working on a 'next-generation smart letterbox' with advanced security features to prevent issues like letterboxes being left open.

This was in response to a query regarding a letterbox that was found open at Block 185 Jelebu Road on Jan 2.

Stomper Raine alerted Stomp to the incident and shared photos she took as she was passing by at about 5.30pm.

"I was walking home after lunch when I noticed the letterbox was not closed or locked at all," she said.

"I gave feedback regarding the matter to SingPost."

Mr Robin Goh, SingPost's Group Chief Brand and Communications Officer said in a statement to Stomp: "SingPost would like to thank the reader for alerting us to this case.

"An internal investigation showed that the affected letterbox’s nut and latch had come loose sometime after the postman had completed his deliveries for the block.

"After we were notified, a staff member was immediately despatched to rectify the issue and the lock has since been repaired.

"Members of the public can call our hotline at 1605 or use the MyPostman platform to report any issues they encounter to us.

"We are also working on a next-generation “smart letterbox” with advanced security features that will hopefully make such issues obsolete in time."