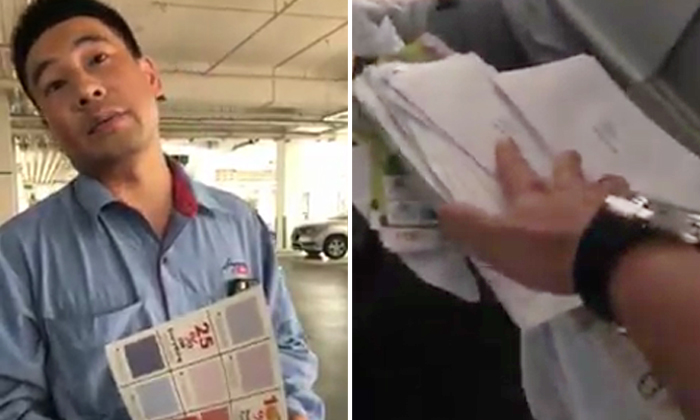 SingPost has confirmed with Stomp that a postman who was caught on video throwing away mail instead of delivering them has been fired.

This comes after videos showing the employee being confronted by a man at Reflections at Keppel Bay on Feb 7 for failing to perform his work duties went viral online.

The videos were posted in several different threads by a Facebook user known as Leena on Feb 8 and had garnered over 2,000 shares as of today afternoon (Feb 10).

It is unclear if the videos, which Stompers Edwin and Ah Boy alerted Stomp to, have been deleted but they are no longer publicly accessible.

The confrontation is believed to have occurred after the man discovered that his flyers had gone undelivered. He also apparently found neat stacks of unopened letters in various dustbins at the condominium.

Based on the videos, the man had apparently spent "a few thousand dollars" printing 7,500 flyers at SingPost -- only to realise that all 1,200 units in the residential complex did not receive them.

The man can be heard asking the SingPost employee if he had seen the flyers before and where the latter had delivered them to.

The employee insisted that he had delivered them all and said some units did not receive anything as there were not enough flyers left.

The man told the SingPost employee: "Not enough? Do you know how many units here? There are 1,200 units here and not one received the flyer."

He also asked the employee whether he had thrown the flyers away.

"I'll give you another chance. I have been observing you every day. Don't play this game with me. You have played the wrong person. You didn't think I would be living here, did you?

"There are 1,200 units here and I didn't see you deliver the flyers to a single one. Have you done your duty? Do you know how much effort I spent making these things? Do you know? You are here to make a living. So am I."

The man had also apparently found neat stacks of letters left unopened in dustbins at "every block" and believed that they were intentionally thrown away by the postman.

Holding a stack of letters, he told the employee that they would not have looked so neat in the dustbin if they had been thrown away by residents.

The man added: "Someone needs to take responsibility for this" and "I won't let this matter rest. I am going to find out where my flyers are exactly. To you, it might be just another piece of paper. To me, it's very important."

This led the employee to complain about how his superiors treated him unfairly and how he had to work overtime without being compensated.

"I am very tired, do you know?" he lamented.

In response, the man said: "Who is the victim here? You? Or the customer? So people bully you and you bully others?" and "If [your boss] is unfair to you, that's his fault. Have I been unfair to you?"

At the end of the confrontation, the SingPost employee said he truly thought he had delivered all the flyers and stopped after thinking he was done with every block.

He continued: "I am really sorry towards you. I didn't know [the flyers were supposed to be delivered here too] and I didn't ask you. This is an oversight of my duty.

"Anyway, I'm going back home on Friday's flight and not returning. If not for this incident, I might still come back. It's that simple."

In a separate clip, the man can be seen showing a third guy multiple stacks of letters that he found in several bins and asking, "How can it be so nicely stacked together?"

In response to a Stomp query, a SingPost spokesman confirmed the incident and said: "One of our postmen was found to have thrown away returned letters and direct mail at a condo on 7 February 2018.

"His action is a serious failure of duty. We do not condone this and he has since been dismissed.

"SingPost thanks the member of the public for bringing this to our attention, and we would like to apologise to the residents of the estate for the service lapse.

"We have since retrieved the mail and will be processing them."

Referring to allegations made by the employee in the videos, the spokesman added: "We will be looking into the claim made by the postman on his work environment, but it does not excuse his actions on the job, nor our decision to dismiss him."