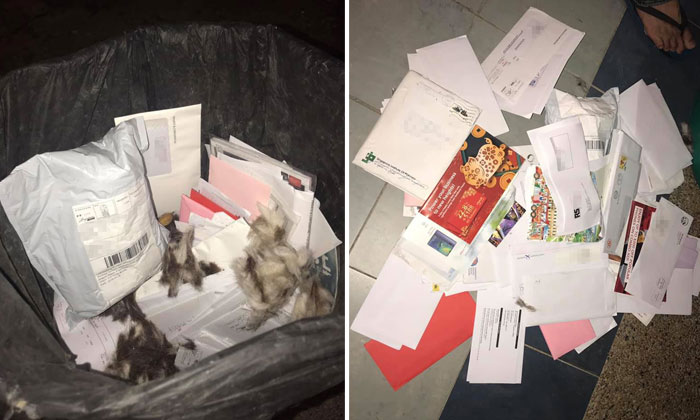 In an update, SingPost informed Stomp that a postman has been arrested after photos circulating online showed unopened letters that had been thrown into a rubbish bin at Ang Mo Kio.

Here is there statement in full: "Following the findings from internal investigations, we have referred the case to the Police. The postman serving the affected areas was arrested in relation to the case.

"As Police investigations are ongoing, we are unable to comment further, but would like to thank Facebook user Alyce Kathlyn for highlighting this case, and allowing us to look into this.

"SingPost unreservedly apologises to the residents of the following blocks:

Should residents of the affected blocks require assistance on their mail items, or are aware of any other incidents of discarded mail, they can call our dedicated hotline at 6845 6222, from 9am to 9pm on weekdays.

SingPost does not tolerate any mishandling or misappropriation of mail. Any postman found to have committed such offences will be disciplined, and, where applicable, dealt with by the full extent of the law.

SingPost is investigating circulated photos of letters that had been thrown into a rubbish bin at Ang Mo Kio.

Several Stompers alerted Stomp to the photos that were originally posted on Facebook by Alyce Kathlyn.

Alyce alleged in her post, published on Monday (Jan 28) at about 8.57pm, that a postman had thrown the letters and parcels into bins.

She also said that the letters were unopened.

"This is not the first time we've found this in Ang Mo Kio," she wrote.

From the photos, the mail was supposed to be delivered to residents living at Ang Mo Kio Avenue 4 and 5.

In response to a Stomp media query, a SingPost spokesman they immediately sent a team to the location based on the addresses on the letters but could not find them.

Here is their statement in full:

"SingPost is aware that images of letters allegedly discarded in a bin are circulating online.

"Based on the addresses on the letters, a team was immediately dispatched to comb the area overnight.

"The bin was located and the team expanded its search to every bin within the vicinity, with no success of locating the letters.

"Letter boxes were also opened to check if these letters had been delivered to affected recipients.

"Concurrently, our customer service team has gotten in touch with the Facebook user but has not received a reply as it was late in the night.

"We are also conducting interviews with the postman on duty.

"Our main priority currently is to locate the letters and have them delivered to intended recipients.

"Please bear with us as we continue to investigate this and will provide an update as soon as possible."

Related Stories
SingPost refutes claims by postman who threw away letters and complained about work environment
SingPost postman sacked after he was caught on video throwing away mail at condo
SingPost apologises and compensates man $68 for lost silver coins worth $180 delivered from the UK
More About:
SingPost
mail
letter
parcel
packages