SingPass and CorpPass systems down for the second day 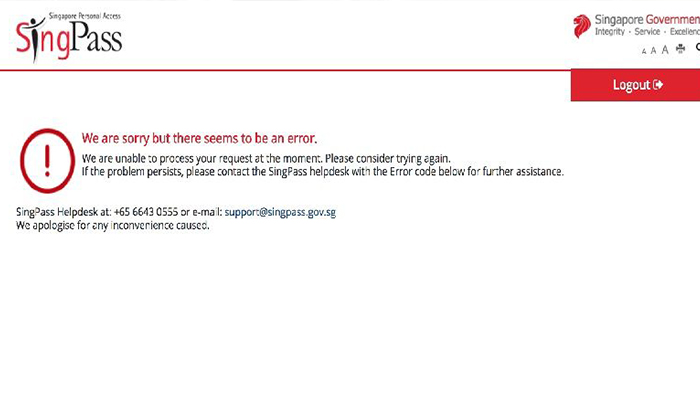 Stomper Nancy told Stomp that she had been trying to access the Central Provident Fund website via SingPass and CorpPass since yesterday (Feb 8) but was unable to do so.

According to The Straits Times, this is the second day that users had issues with the authentication systems after a six hour outage was reported yesterday.

In a Facebook post at 12.31pm, the Government Technology Agency of Singapore (GovTech), the agency behind the development of SingPass and CorpPass, said it was looking into the problem.

"We understand SingPass and CorpPass users may be unable to access the systems. Our team is looking into the matter now. We appreciate everyone's patience and will keep you updated," said GovTech.

Later, GovTech said on Facebook that SingPass and CorpPass systems have been fully restored at 3:15pm and apologised for the inconvenience caused.

"We are conducting a thorough review and implementing further measures to minimise any service disruption," added GovTech.

Yesterday, users also started experiencing intermittent problems and slowness in accessing SingPass and CorpPass as early as 11am.

The authentication services were then taken down in the afternoon for urgent maintenance due to a "server fault", said GovTech.

GovTech added that Thursday's outage was not a result of any cyber attack and that services were fully restored at about 5.15pm.

Set up in 2003, SingPass has more than 3.3 million registered users and supports 57 million e-government transactions, including the filing of income taxes, parking fine payments and foreign domestic worker applications.

CorpPass, rolled out in September 2016, is used for corporate transactions, including the filing of corporate taxes and work permit applications.

Related Stories
Singtel users frustrated by broadband outage in wee hours of Saturday morning
No train service on Bukit Panjang LRT as train damages signal stop tape
Stomper arrives at Pioneer station in the morning -- only to find out there's no train service
More About:
disruption