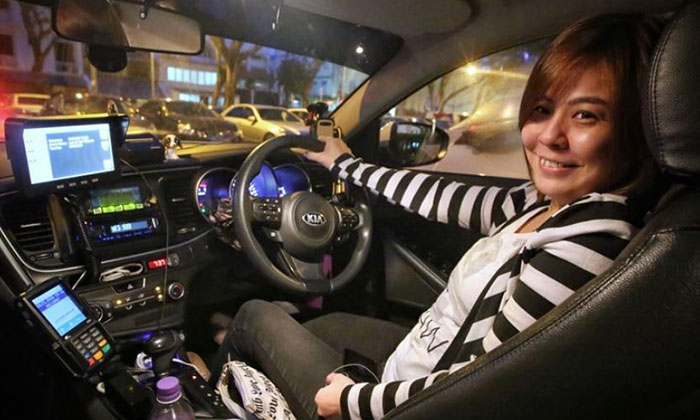 Sharing with Shin Min Daily News about her experience, Ms Liu Anhui, 33, said that she first started working as a private-hire vehicle driver about a year back but has since transitioned to being a taxi driver.

To date, she has worked as a night shift taxi driver for about half a year. Her shifts usually start at 5pm in the evening to 5am the following morning. She works seven days a week and does not get any days off.

Although there are no shortages of female taxi drivers, Ms Liu said there are few female cabbies who take the night shift:

“Based on my observation, there are very few female drivers like me who take the night shifts. They can probably be counted with two hands.”

Ms Liu went on to describe her two relationships before becoming a driver. She first wedded her boyfriend of five years in 2012.

However, marital problems soon surfaced within a year, and her husband fell for another woman. Soon, both Ms Liu and her husband’s families were also embroiled in the dispute. The involvement of acquaintances only served to worsen the problem.

This eventually led to Ms Liu divorcing her husband.

It was during the period that Ms Liu resolved to be independent. She recalled vividly what her husband said to her just before their divorce:

“Everything you wear and own, who do you think pays for them?

“From that moment on, I told myself not to depend on any man, and that I have to be independent.”

After her divorce, Ms Liu eventually got into a new relationship with another man. Ms Liu, however, wanted to end the relationship as she could not put up with her boyfriend constantly “picking” on her.

It was then she discovered that she was pregnant. Not wishing to abort the baby, Ms Liu ultimately chose to give birth to her son.

Ms Liu who was then working as a sales executive became a driver at the recommendation of her brother.

She said that she was able to fetch home about $2,000 each month.

“My brother is also a taxi driver. I am very grateful to him for his guidance and encouragement along the way.

“I am now slowly getting to like this job. Although it may be difficult at first, I will persevere so my child will be proud of me.”

It is not uncommon for night shift drivers to pick up passengers who are drunk due to their working hours.

Ms Liu is no exception. However, she has chosen to continue with the night shifts as there are more peak hour periods in the later part of the day.

“There was once I picked up four passengers — three guys and a woman — at Tanjong Pagar. They were all Caucasians.

“Once they boarded my car, one of the guys at the back kept asking if he could touch me. He said that he could pay me.

“The female passenger at the front passenger seat also wanted to smoke. I was afraid that I would be in danger if I resisted, so I quickly brought them to their destination and drove off.

“I didn’t want to create trouble.”

Ms Liu said that she usually avoids going to nightspots for passengers. Instead, most of her passengers are picked up from the Changi Airport.

Sometimes she would also run into rude airport staff, but would simply tolerate their behaviour.
Citing the rental fees for the cab, Ms Liu said that she could not afford to take time off:

“My son is currently being looked after by my brother and mother. I can only visit him on the weekends. I wouldn’t have been able to tide through this period without the support from my brother and my family.”

Ms Liu said that she hopes to be able to spend more time with her son in the future once her income source has stabilised.