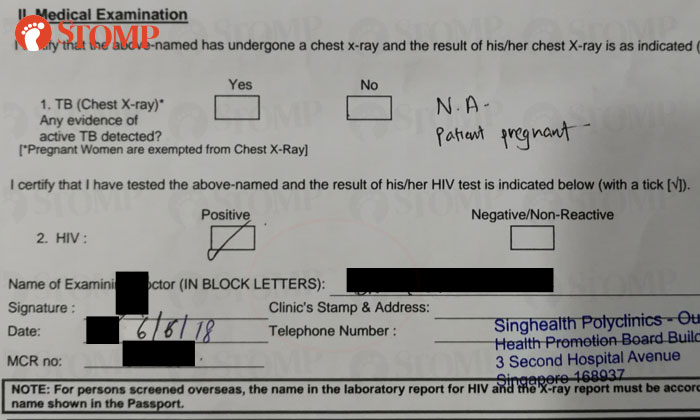 A couple experienced anxiety and confusion when the wife received a medical examination report that mistakenly indicated that she was HIV positive.

Stomper Keith told Stomp that he was shocked when he saw his wife's Immigration and Checkpoints Authority (ICA) medical examination report from Outram Polyclinic on June 6.

He said that his wife had gone for the medical examination on May 28, 2018 to apply for permanent residency in Singapore.

He also shared with Stomp another medical exam report his wife had received the same day that indicated that she was HIV Negative or non-reactive. 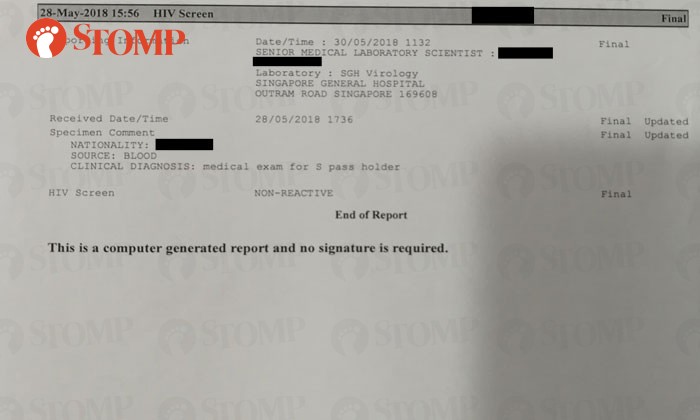 The couple was confused at the two different results.

Keith then immediately contacted SingHealth to clarify what had happened.

"This is not a small issue," Keith said.

He told Stomp that he was even considering divorcing his wife if his wife was indeed HIV positive.

"She is pregnant with a second child there are a lot of risks involved," he added.

"If we were to be of weak heart and mind, divorce could have taken place or even suicide could have happened with the unborn baby inside," he said.

"If I were to be a father or a mother who knows the baby will be born HIV positive, the second thing that could have happened was an abortion."

"We apologise unreservedly for the distress and anxiety caused to our patient and her family for the transcribing error in the ICA medical examination report.

"During the visit, the patient requested for the doctor to certify her ICA medical examination report.

"During the process, the doctor mistakenly ticked the HIV ‘positive’ box in the report, even though the HIV screening result was negative.

"Following the incident, we have contacted the patient and her family to extend our apologies and provided them with a fresh ICA medical examination report.

"We have counselled the attending doctor and taken steps to strengthen our processes to ensure that this does not happen again."