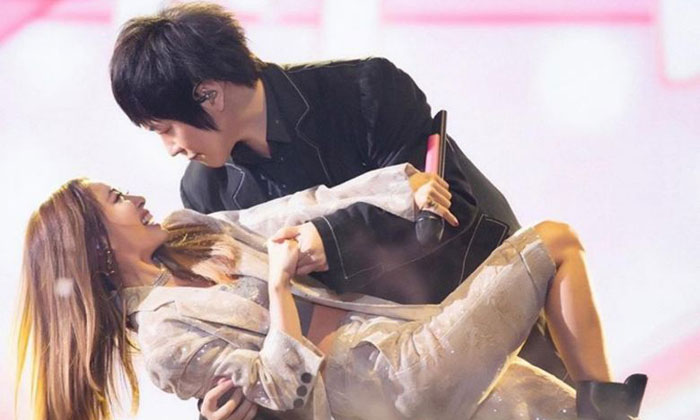 Has Taiwanese singer Jolin Tsai admitted that she is dating Mayday singer Ashin?

She has repeatedly been romantically linked by netizens to Ashin, 43, whose real name is Chen Shin-hung.

Tsai, 39, who attended Mayday's Just Rock It!!! Blue concert in Shanghai as a guest singer, had the crowd screaming on Sunday (Nov 3) when she asked Ashin to "marry" her.

The Ugly Beauty singer, who is holding her own concerts at the Taipei Arena in December and January, had invited five-member band Mayday "for a date on Jan 5 at Taipei Arena".

In an exchange between Tsai and Ashin, she said: "I will marry you today if you agree today."

Band member Monster said it was all up to Ashin, who was once absent from Tsai's concert to avoid providing grist for the rumour mill.

Tsai then asked Ashin: "Are you still allergic to me?"

His response: "No lah, I was really unwell then."

The pair then performed two songs together: Womxnly - which they co-wrote - and Marry Me Today, a duet Tsai used to perform with David Tao.

Tsai and Ashin did some ballroom dancing, ending with her in his arms as she smiled at him. A snapshot of the moment was posted on social media by both of them.