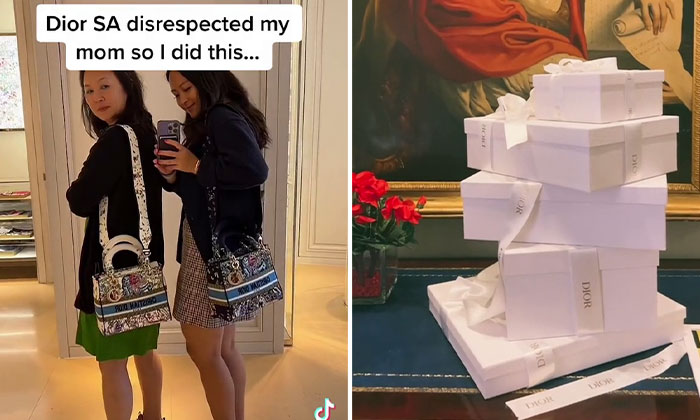 A Singaporean woman decided to take matters into her own hands when her mother was allegedly disrespected by a sales associate at a Dior store in Italy.

Amjea, who goes by @nahtyourbby on TikTok, posted a video on May 18 that has since gone viral with over eight million views.

According to 8world News, Amjea is a Singaporean living in the United States.

She said that her mother was apparently ignored by a sales associate and left standing unattended for 10 minutes while the staff went to serve another family instead.

"I told my mum, it's okay, it's because she works in commission and saw what you were dressed in and thought you were completely poor," she said in the clip.

She later insisted that they go back to the store together.

This time, Amjea sought the assistance of another sales associate who was "really nice" and offered them basic customer service, as well as water and coffee.

When she returned after lunch to buy several bags at once, the first sales associate who had ignored her mother reportedly looked at the haul and congratulated her colleague sarcastically.

"At the end of the day, I'll do anything to make my mum happy," said Amjea.

On May 30, Amjea posted an update clarifying her intention in posting her original video after it went viral and was picked up by the media.

All I wanted was to share my experience. By no means was I trying to take revenge, prove a point or have anyone fired. I just wanted a good shopping experience and a polite store associate

"All I wanted was to share my experience," she wrote in her caption.

"By no means was I trying to take revenge, prove a point or have anyone fired.

"I just wanted a good shopping experience and a polite store associate."