Singaporean wakes up from 2-week coma after Genting bus crash 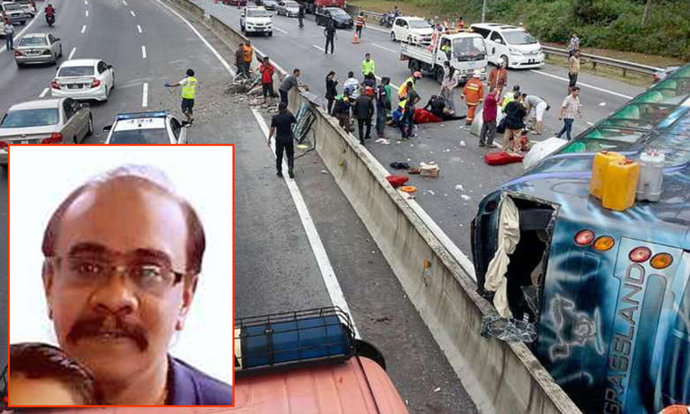 After two weeks of dreading the worst and hoping for the best, Mr R. Manokaran's family finally had good news on Wednesday.

To much relief and joy from his loved ones, the barber opened his eyes for the first time since he lost consciousness after he was seriously injured in a bus accident in Malaysia on Aug 31.

His wife, Madam Muniandy Barvathi, 48, told The New Paper that he even managed to ask her a few questions about the accident.

But the housewife added that it will take "a long time" for her husband, 52, to fully recover.

The couple and two of their three children, Miss M. Priyatharsini, 24, and Mr M. Navindran, 19, were among nine Singaporeans who were injured after a double-decker Grassland Express And Tours bus crashed into a road divider and flipped on its side on the Karak Highway as it was on its way to Singapore from Genting Highlands.

Though they escaped with less severe injuries, Madam Muniandy and her son now have a fear of buses, especially double-decker buses.

She said: "The other day I had to take a bus, and when a double-decker arrived, it brought back bad memories."

She added, with tears welling up in her eyes: "I didn't dare to go upstairs (to the top deck) and stayed below."

Mr Navindran added that he too, was traumatised by the crash.

"I haven't taken a bus since the accident. Instead, I take taxis or use Grab," he said.

Madam Muniandy, who has kept vigil by her husband's side since the accident, said she also has difficulty sleeping at night.

She often wakes up at around 3am and because she is unable to go back to sleep, she spends the time praying for her husband, who has a barber shop in Taman Jurong.

Recalling the accident, Madam Muniandy said her family, who were returning home after a four-day holiday in Genting, were seated on the right side of the top deck of the bus when it crashed.

"My husband and I were sleeping. Suddenly I woke up because I heard his voice. When I opened my eyes, the bus had flipped and I was in a standing position," she said.

"My husband was lying at my feet covered in blood and he was shouting: 'Very pain, very pain, help!'."

While she and her two children escaped with cuts and injuries, her husband was severely hurt because he was flung into the stairwell of the bus.

He had a broken arm and wrist, a punctured lung and several damaged ribs. Both his kidneys failed, and he was put on dialysis.

Last Thursday, Mr Manokaran was transferred from Kuala Lumpur General Hospital to the National University Hospital (NUH) after his condition was deemed stable enough for the four-hour ambulance ride back to Singapore.

Madam Muniandy also came back on the same day in a van.

Their two children had earlier returned to be treated for their injuries at NUH and have been discharged.

When TNP visited the family in hospital yesterday afternoon, Mr Manokaran was awake after undergoing his third operation for his broken arm and wrist.

He was unable to speak because of the breathing tube in his mouth, but was able to nod in response to his wife's gentle prodding.

Mr Navindran and his elder brother, who did not go on the trip, have been accompanying their mother to NUH every day.

Miss Priyatharsini usually stays at home as she is recovering from ankle surgery.

Mr Navindran, a full-time national serviceman, said: "Many relatives have been very supportive and they visit every day as well. My mother is quite badly affected. Sometimes she'll say: 'I wish I could wake up from this bad dream.'

"But we have to be strong and deal with the situation. Thankfully, we are all alive."

He said the worst was over for the family and his father is getting better by the day.

Grassland Express And Tours has offered to cover his father's medical costs in Malaysia and Singapore, he added.

He also said that Deputy Prime Minister Tharman Shanmugaratnam, who is the Member of Parliament for Jurong GRC where the family lives, visited Mr Manokaran on Wednesday.

Madam Muniandy said: "I haven't told (my husband) the whole story or the severity of his injuries.

"I just said that there was an accident and he has a few injuries here and there. I don't want to scare him."

Madam Muniandy was found to have two hairline fractures in her spine last Thursday after a check at NUH, but does not need to be hospitalised.

She said: "He's getting better, but the doctors said the recovery process will be a long one. We don't have a time frame right now, but I feel so much safer and glad that the whole family is back in Singapore and that he's awake now."

All injured passengers back in S'pore

The tour bus was heading to Singapore from Genting Highlands in Malaysia when it crashed and flipped on its side on the Karak Highway.

The accident on Aug 31 was the first of four fatal cases involving Singaporeans on Malaysian roads in the past two weeks.

According to Malaysian newspaper The Star, the double-decker Grassland Express And Tours bus crashed into a road divider and skidded for about 20m.

Nine Singaporeans, including Mr R. Manokaran and his family, were injured.

One of the injured, Mr Lim Sia Thian, 62, died of severe traumatic brain injury on Sept 4at the Kuala Lumpur General Hospital.

A female passenger warded in the National University Hospital was reported to be in stable condition.

Last Thursday, The New Paper reported that some of the passengers lost their valuables after they were rescued by passers-by, with at least two couples reporting their loss to the Malaysian police.

When contacted yesterday, Malaysian police said the missing belongings were the responsibility of the bus company.

Grassland did not reply to TNP's queries by press time.