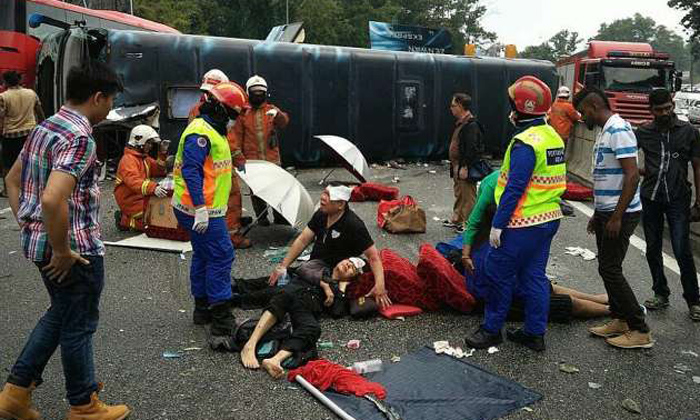 Nine Singaporean tourists were hurt after a tour bus flipped over on the highway on its way back from Genting Highlands on Wednesday (Aug 31) afternoon.

According to The Straits Times, the bus from Singapore's Grassland Express & Tours was ferrying 12 passengers, all from Singapore.

None of them were critically injured, a spokesperson said.

The Star reported that the impact of the crash caused the bus to skid for about 20 metres.

The crash obstructed all the lanes on the highway except for the emergency lane, and led to a traffic jam stretching more than 9km.

An eyewitness who declined to be named said he saw the bus swerving to the right before hitting the divider and overtuning.

“It was very scary because we were just behind the bus.

“But I can tell that the driver wasn’t speeding. He was driving within the speed limit, if I’m not mistaken."

It is unclear how the driver lost control of the bus.

The three passengers who escaped unscathed are on their way back to Singapore, according to Grassland.

Related Stories
Man in his 60s dies after getting run over by bus outside Toa Payoh interchange: 36-year-old bus driver arrested
Arrested by police: 18-year-old Nissan GT-R driver who sped at Stadium carpark before crashing into oncoming car
Drivers and cabbies stop to help in accident along PIE
More About:
accident
Malaysia
Bus
injured