Singaporean stars Christian Lee and Tiffany Teo shine with victories at ONE: Heart of the Lion 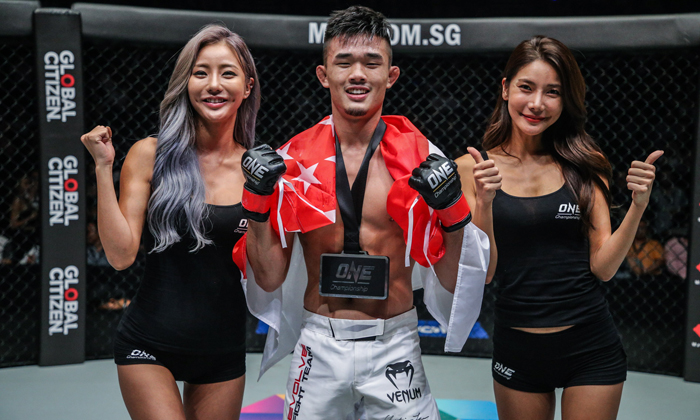 Christian Lee and Tiffany Teo hoisted the Singaporean flag aloft as they emerged triumphant in their respective matches at ONE Championship’s second and final event in Singapore for 2018.

Both Singaporean talents competed on the undercard of ONE: HEART OF THE LION, which took place at the packed Singapore Indoor Stadium last Friday, 9 November.

In the co-main event of the evening, Lee gave his countrymen at the state-of-the-art arena a reason to celebrate after defeating Japan’s Kazuki Tokudome via technical knockout in the first round.

The 20-year-old former ONE World Title challenger weathered Tokudome’s takedown efforts in the opening moments of the bout before landing a solid right straight that dropped his Japanese opponent to the canvas.

Lee, who took the bout against Tokudome on short notice after his older sister and reigning atomweight queen Angela Lee was forced to withdraw in her bout against strawweight titleholder Xiong Jing Nan due to an injury, finished the task at hand by raining down piston-like ground shots, forcing the referee to step in and wave it off at 3:07 of the opening frame.

With his impressive performance against Tokudome, Lee improves his professional record to 10-3, claiming his sixth win by way of knockout.

In his post-match interview with color commentator Mitch Chilson, Lee believes that his first-round stoppage victory over a highly-touted Japanese veteran such as Tokudome is enough to put him in the position to vie for the interim world title in his division since ONE Featherweight World Champion Martin Nguyen is still nursing an injury.

On the other hand, Teo put on an absolute show to the delight of a jam-packed Singapore Indoor Stadium crowd against multiple-time Brazilian Jiu-Jitsu world champion Michelle Nicolini.

For 15 minutes, Teo and Nicolini gave everything they had and left it all inside the ONE Championship cage.

While Nicolini showcased her world-class grappling, it was Teo who kept her opponent on the end of some powerful striking combinations.

After three rounds of gruelling action, Teo took home the hard-earned victory by unanimous decision, upgrading her win-loss slate to 8-1.

Meanwhile, in the main event of ONE: HEART OF THE LION, Kevin “The Silencer” Belingon of the Philippines ended the nearly five-year reign of Bibiano “The Flash” Fernandes of Brazil to successfully unify the bantamweight titles.

Fernandes did his best to take the action to the ground, but Belingon showed much improved grappling skills.

After five rounds of action, Belingon took home the victory via split decision and was crowned the undisputed ONE Bantamweight World Champion.

View photos of all three matches in the gallery.