Singaporean man who returned from US shares SHN experience in hotel 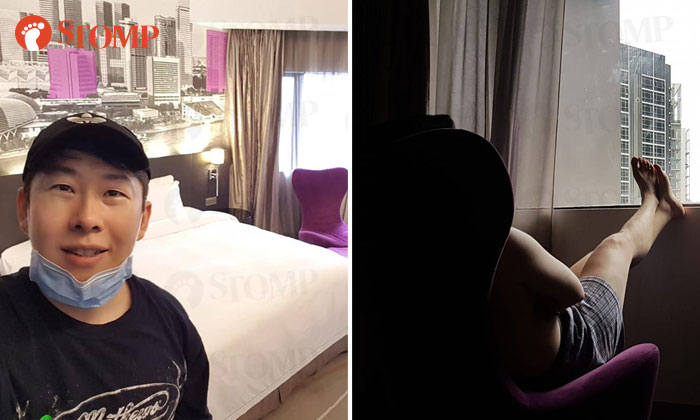 Serving a 14-day stay-home notice (SHN) in an Orchard hotel room sounds pretty good but what is it really like?

Stomper Tim shared with Stomp his experience serving his SHN at an unnamed hotel after he returned to Singapore from the United States on Mar 26.

It was shortly after the Ministry of Health announced that those returning from the UK and the US from 11.59pm on Mar 25 would serve their SHN in dedicated facilities instead of their own homes.

"I think my group was one of the first groups because I came back on Mar 26 at 7am," he told Stomp.

Tim, who works in Texas, arrived in Singapore from Los Angeles via Japan.

"At the arrival hall, there were immigration officers handing out clipboards to everyone to fill up their particulars and where they were coming from," he said.

"We were then directed to the holding area and had our passports collected.

"After about 30 minutes, we were split into two groups and escorted to board two different buses.

"The immigration officers followed us to the hotel in Orchard.

"Once there, we were made to form a line behind the hotel's back door where a hotel staff member checked our details.

"Once he confirmed our identities, we walked back to the security post to get our room key and went up to the top floor of the hotel via a service lift.

"From then on, I've been in the room and have never come out."

Tim has been posting updates on his Facebook daily, showing his lodgings and food he gets served throughout the day.

And if you are wondering if he has to pay for anything, he doesn't.

"I basically watch TV and stare out of the window to pass time as documented in my photos," he said.

"So far it has been good but really boring."