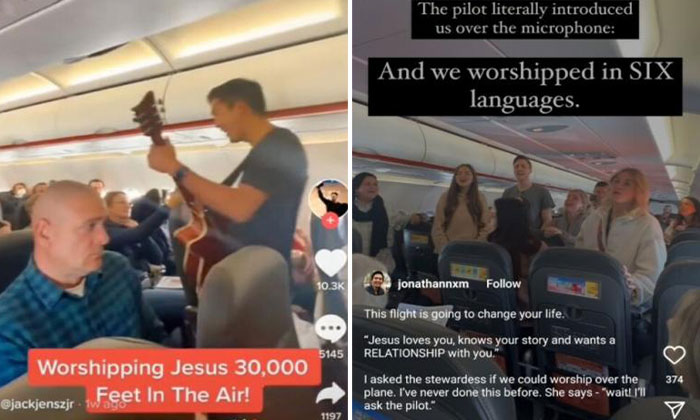 Passengers onboard an easyJet plane might have experienced a "closer-to-god" experience mid-flight when a Singaporean man picked up a guitar and sang songs of Christian worship.

In a video trending on social media, the man, identified as Jonathan Neo, stood along the plane aisle strumming his guitar while singing out loud.

The 20-second clip on Twitter has garnered a whopping 30 million views since it was posted on Saturday (April 16).

Though there were a handful onboard the flight who sang along with the man, his impromptu performance received visibly mixed reactions from other passengers.

A Caucasian man in a blue and green plaid shirt, for example, looked utterly unimpressed and unamused at what was going on.

Mr Neo himself posted an Instagram Reel claiming that he had checked with the cabin crew if "we could worship over the plane" beforehand.

Apparently, the pilot gave the green light and even introduced Mr Neo over the microphone.

Imagine you get on a plane and you have to listen to this pic.twitter.com/RpY8d7RK4Y

On TikTok, user Thatdaneshguy was so unhappy with the man's antics that he searched for his social media accounts before including them in his TikTok rant.

"Hello Jonathan, you want attention? Here you go," he said.

Many other netizens shared similar sentiments:

"Even if it wasn't religious, it's not appropriate to disrupt the flight for other passengers."

"That's not fair to do to a captive audience."

One commenter wrote that he has witnessed impromptu performances like these frequently while onboard a flight, especially long-haul ones.

"I've had the cast of the lion king, a military singing group, a barbershop quartet and a few others (mostly amateur groups)," he added. "Sometimes it's annoying but not a crime, especially if they asked the pilot."