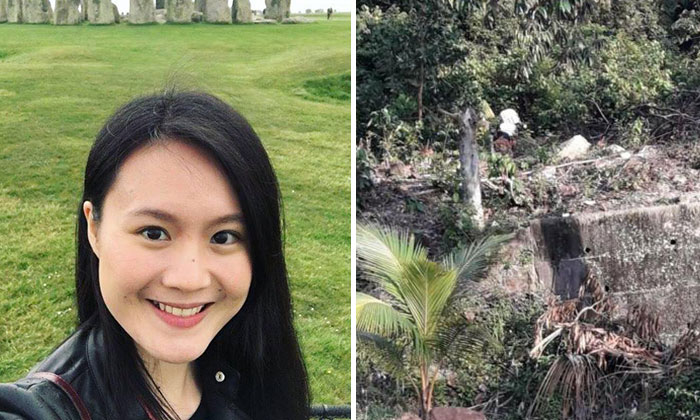 A Singaporean woman and a male companion have been missing for more than 40 hours after trekking on a mountain in Malaysia's Kulai district in Johor.

The incident happened at Gunung Pulai, on Monday (Feb 5) at 5.55pm.

The pair had entered the mountain via a trail despite it being closed off to the public, reports Lianhe Wanbao.

Facebook user Wanyin See, a friend of the missing woman, Lum Jie, uploaded a post on Tuesday (Feb 6), asking for help in locating the two.

Wrote Ms See: "She’s missing at Gunung Pulai. If you know of any experienced trekkers, who can join in the search for her, please let us know. It would really help to have more people on the ground! Kindly help to spread the word. Thanks!"

In her post, Ms See also reiterated that her friend remains missing and uncontactable.

In her post, Chloe stated that Lum Jie was last spotted leaving her house at around 8am on Monday.

She wore a green top, tights, running shoes, and carried a backpack.

Later in an update on the same post, Chloe clarified that rescue teams and volunteers are currently scouring the mountain for the couple.

She added: "The rescue team and volunteers are covering the mountain but as the area is big, more teams may work faster. A few other teams are going in tomorrow.

"(The) only help now might be to pull in more teams (with experience) to help."

Witnesses told reporters that the couple were spotted driving a Singapore-registered Sport utility vehicle (SUV) to the foot of the mountain.

They then parked the vehicle in front of a resident’s home and went onto the mountain.

The two have not been seen since then.

A Malaysian police spokesman confirmed that the police received a call for help on Monday with the caller saying that a man was missing on the mountain.

He said: "The patrol officers who went to the scene also reported that they suspected that there was another woman involved, and she could be injured."

Search and rescue operation involved 28 personnel from the state Fire and Rescue Department, the police and the state Forestry department, Bernama reported.

According to Lianhe Wanbao, the two got lost in the mountain, and Lum Jie had somehow sustained injuries, prompting her companion to call for help.

Emergency services were activated and personnel dispatched to find them on the mountain.

However, they were unable to determine their exact location.

It is understood the SUV belonged to Lum Jie’s companion, Mr Chen, aged 27.

When reporters got in contact with Mr Chen’s father, he told them that he had last seen his son on Monday morning, but did not know about him travelling to Malaysia.

The man said that he and his wife were very worried about the safety of their son.

A spokesman for the Ministry of Foreign Affairs (MFA) told The Straits Times that the Singapore Consulate-General in Johor Baru is in contact with local authorities which are coordinating the search operations.

MFA said: "Officials from the Consulate-General are in the Gunung Pulai area to assist the affected Singaporean families."