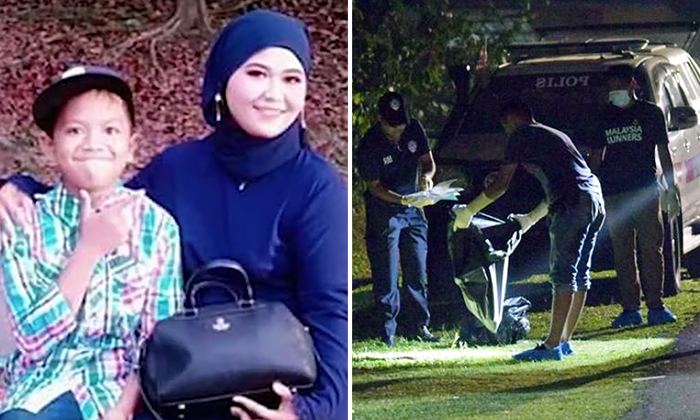 A Singaporean man was arrested for allegedly killing and dismembering his wife and his 11-year-old stepson.

At about 4pm on Thursday (Oct 10), a grass-cutter found two dismembered bodies that were already decomposed and infested with maggots.

The bodies, which allegedly belong to a 27-year-old Malaysian mother and her 11-year-old son, were found left in some bushes at Perindustrian Krubong in Melaka, Malaysia.

A 31-year-old Singaporean man, who married the deceased about one year ago, has been found to be the main suspect of the case.

Lianhe Wanbao reported that the couple had gotten into an argument at about 9pm on Oct 5 after the wife complained to her husband about certain family issues.

The wife then brought up a divorce and threw a wedding anniversary present at the suspect. He allegedly flew into a rage and stabbed his wife with a kitchen knife. The suspect then used a parang to chop her head off.

The suspect allegedly killed his 11-year-old stepson after the latter witnessed the entire incident.

The New Paper (TNP) reported that the suspect had posted birthday wishes for his wife on Facebook. The post was uploaded around the time the wife was killed.

Through investigations, the Malaysian police found the victim’s two-storey residence at Taman Merdeka Jaya in Melaka. They revealed that bloodstains were found in a bedroom on the first floor. TNP also reported that two heads were found at the residence's roof.

The hands of the two victims were discarded at a rubbish bin nearby. The suspect placed the other limbs in a bag and left it in the trunk of a car. The car was driven to where the bodies were discovered and set on fire.

On Tuesday (Oct 8), the suspect boarded a bus and returned to Singapore. While having a meal with his family, the suspect's father noticed that his son was behaving strangely.

Upon being questioned, the suspect confessed to his father about the act. His father persuaded him to turn himself in to the authorities but was later arrested by the Singaporean police at his place of residence. The suspect was handed over to the Malaysian authorities on Friday (Oct 11).

Lianhe Zaobao reporters visited the suspect's place of residence at a rented unit in Toa Payoh on Oct 11 but no one came to the door.

A 75-year-old neighbour Mr Cai said that a young married couple lived in the unit with two young children. He also saw a man being arrested by four police officers on Oct 10.

Felicia, who is a 47-year-old hawker living on the same floor, told reporters that the suspect was a food deliveryman who frequently rode on his e-scooter.