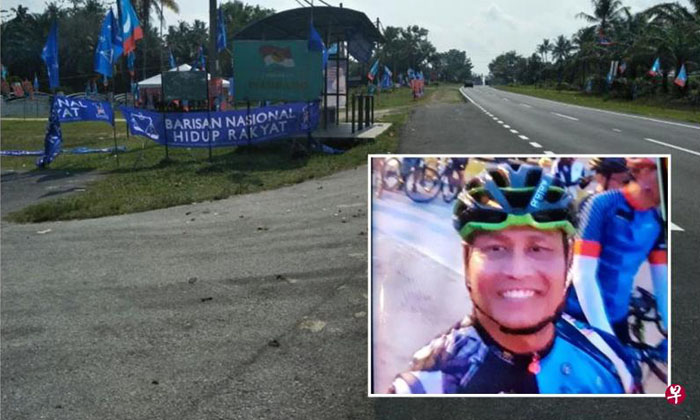 A Singaporean man went missing halfway through a 160km cycling event in Ipoh, Malaysia, on May 6, after stopping to rest because of a leg cramp.

Abdul Samat Bin Ismail,a 56-year-old mechanic, had joined the cycling event with about 20 other Singaporean cyclists.

The organiser of the cycling event sent out a search party of 40 people but was still missing at 12.30pm yesterday (May 8).

Group leader Mr Liu De Wei, 45, told Lianhe Wanbao that Mr Samat had a leg cramp at 1.45pm, leading him to take a break at the 24km mark of the journey.

Mr Samat went missing at the route between Siputeh and Gopeng, according to the event organiser's Facebook page.

Mr Liu said: "Although he had a leg cramp, his body was in good condition.

"Hence, everyone decided to continue their journey towards the finishing point as they thought that he would slowly catch up with them.

"However, when he was still missing at about 3pm, his fellow cyclists decided to call him but there was no answer."

Everyone then went back to the hotel to re-group, before making their way back to Singapore, but Mr Samat remained unseen and uncontactable.

Mr Liu then called the police.

He followed Malaysian police back to the water stop to look for Mr Samat, while the organiser sent a search party of 40 people on motorcycles to nearby areas.

Mr Liu said: "This was already Mr Samat's third time participating in this Ipoh cycling event. Whether was it the route or the hotel that the participants were staying at, they all remained unchanged. Hence, his disappearance is perplexing."

The Ministry of Foreign Affairs (MFA) in Singapore said that it has been alerted to the incident and is providing assistance to Mr Samat's family.

The High Commission of the Republic of Singapore in Kuala Lumpur is currently working closely with the Malaysian government on the matter.