Singaporean man, 25, dies after car hits him and friend from behind in JB 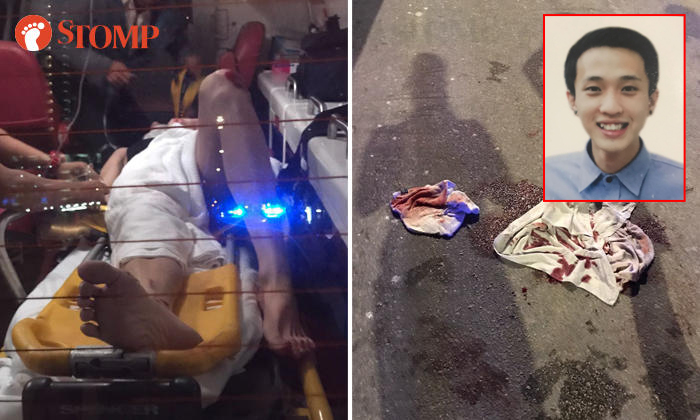 Malaysia's Health Ministry has denied that there was a delay in attending to the accident and in treatment for Justinian Tan over payment.

Stomp attended the victim's memorial service and spoke to his sister.

A 25-year-old Singaporean man, Justinian Tan, died after he was hit by a car from behind while he was in Johor Bahru, Malaysia, with five other friends.

One of his friends, Brandon Yeo, was also hit by the same car but survived.

The fatal accident happened at around 3am on Aug 25, near New York Hotel, at Jalan Dato Abdullah Tahir.

Justinian was subsequently taken to Singapore General Hospital, where he was pronounced brain dead three days later on Aug 28 at around 5.56pm.

His parents decided to take him off life support this morning (Aug 30) at around 12.30am.

Stomp understands that the incident is a Coroner's case.

The other victim, Brandon Yeo, was discharged yesterday morning (Aug 29) and is currently in stable condition.

Joshua De Rozario was among the group of friends who were in Johor Bahru. He had witnessed the accident.

"We were having lok lok for supper in JB and were walking back to the car when a car blindsided us from behind and hit two of my friends, sending them flying forward."

Joshua said that the six of them were chatting as they were walking back their Honda Odyssey between 2.45am and 3am on Aug 25, after their supper.

All of a sudden, a car came from behind, just missing Ernest, but hit Justinian, sending him flying, before hitting Brandon. Joshua said that the driver of the car, a Proton Saga, "didn't stop at all, he just kept on going".

Joshua immediately went to check on Brandon, who was conscious but had broken his femur. The other friends attended to Justinian, who was unconscious but convulsing.

When Joshua subsequently went over to Justinian, he saw that his friend was struggling to breathe and was coughing out a lot of blood.

Joshua tried to remove the blood from Justinian's mouth to help him breathe, and also rendered basic first aid.

Joshua added: "Passers-by helped us to call the police and ambulance.

"My friends were rushed to Sultanah Aminah Hospital in JB after waiting for 30 minutes.

"In the meantime, the police in JB asked us to clean up the bloodstains on the road.

Joshua said that two police officers arrived at the scene and told them to clean up the blood.

He said: "We didn't clean up, they were trying to pour water and getting rid of all the blood and everything... They told us, but we just walked off lah.

"They didn't block the road, it wasn't a crime scene after we left, I assume everything went back to normal. It (the accident scene) wasn't cordoned off.

"There were just two pillars the passersby helped us put there, to block off and redirect traffic, but that wasn't done by the police."

Joshua added: "Upon reaching the hospital, we were asked to pay RM1,350 for each victim before they would be able to carry on with further action.

"We did not carry so much cash so we had to go find an ATM.

"At 8.30am, the hospital requested for another RM1,350 as Justinian needed another operation because his brain was bleeding.

"Upon inquiring further, we were told that Justinian had a 50-50 chance of survival and that the operation would be done by a medical officer, instead of a consultant or surgeon.

"We then called the Singapore embassy, who arranged for a private ambulance in Malaysia to pick up our friends."

Joshua said that he and the rest of his friends remained in JB because the embassy had advised them to a make a report with Malaysia's traffic police.

He said that although the driver of the Proton Saga had driven off after the accident, passers-by had taken down the car's licence plate number and informed Joshua and his friends, for them to make a police report the next day.

However, Joshua said that they were unsuccessful as they did not manage to speak with any officers in JB.

He continued: "The ambulance left for Singapore from Sultanah Aminah Hospital at around 10.45am and arrived at around noon.

"Justinian was sent to Singapore General Hospital (SGH) in critical condition while Brandon was sent to Gleneagles Hospital.

"By then, it had already been close to 10 hours since the accident.

"At 2.30pm, the doctors explained that too long had passed and that Justinian's injuries were too severe.

"He was pronounced brain dead and placed on life support on Aug 28 at 5.56pm.

Joshua said Justinian's parents did not want to pull the plug "until everyone had seen him".

He added: "My friends and I returned to JB yesterday (Aug 29) to make a police report. The matter is currently in the magistrate's hands."

According to Joshua, the investigating officer in Malaysia told him that the driver who knocked down the two victims had come forward to report the accident himself within 24 hours.

However, it is unclear if the driver has been arrested.

When Stomp attended Justinian's wake at Block 323 Serangoon Avenue 3 at about 8.30pm today (Aug 30), Joshua was there to speak to us.

Joshua told Stomp that he had been friends with Justinian since they were in Primary 1 at St Gabriel's Primary School.

He is currently studying in Perth, Australia, but had come back to Singapore for a break and wanted to catch up with Justinian and their other friends.

He said: "The most important people in his life are his family, he always put family first... but he was always there for you (his friends), whenever he could."

Joshua went on to elaborate on how great a friend Justinian was.

"When I was serving NS, I had a tumour in my leg, and I was out for six months. Justin visited me pretty much every day and stayed with me, brought me lunch, brought me everything, because I couldn't walk.

"That's just the kind of person he was."

Responding to media queries by Stomp, a spokesman for the Ministry of Foreign Affairs (MFA) said: "We are saddened by the unfortunate passing of Justinian Tan.

"The Singapore Consulate-General in Johor Bahru had rendered consular assistance to the Singaporeans involved, including assisting with the arrangements to transfer the injured Singaporeans back to Singapore."

On Sep 1, the Malaysian Ministry of Health (MOH) denied reports that there was a delay in attending to Justinian.

The Straits Times reports that in a press release issued by Malaysia's Director General of Health Datuk Dr Noor Hisham Abdullah, the MOH noted that after Justinian sustained injuries, an emergency call was made at 2.57am.

An ambulance was then dispatched at 2.59am and reached the spot of the accident at 3.10am, it added.

Subsequently, the ambulance departed from the scene with the patient at 3.15am. Upon arrival at the Emergency Department of the hospital, Justinian was admitted to the "Red Zone".

According to the press release, emergency treatment under an "Advanced Trauma Life Support" protocol was followed, which had already been initiated by the ambulance team.

In response to a statement on Sep 1, Joshua said that there could have been miscommunication at the hospital due to a language barrier as the staff "were speaking in Malay and we were speaking English and we had difficulties communicating".

He said:  "When the accident happened, a lot of things were going on at once, so the wait for help to come felt really long then. I thought it took 30 minutes but their logs said differently."

He told The Straits Times that, "We don't know what to do when something happens there (in JB). That's the point we want to convey. It's not about wanting to get revenge, because that is not going to bring Justinian back. We want to move on."

According to The Star, Johor's police arrested the hit-and-run driver, who is in his 30s, on Friday (Sept 1) afternoon. He has been released on bail.