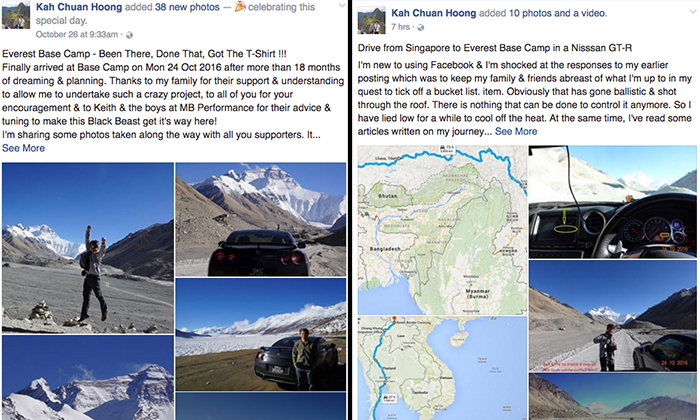 We all know how gruelling climbing Mount Everest is, but Singaporean Kah Chuan Hoong may have achieved something equally phenomenal -- driving to the famed mountain in his trusty Nissan GT-R, after more than 18 months of planning.

Eschewing the mighty feat, this may possibly be the first time that anyone has driven a GT-R to the Everest Base Camp.

But he’s not stopping there.

The adventurer is planning on driving it back, albeit some modifications to his return route, and the trip is expected to take an extra four days.

According to Chuan Hoong, the extra time will be spent driving on the deserts and grasslands of China, Thailand and Malaysia.

He is expected to arrive in Singapore in November.

“Finally arrived at Base Camp on Mon 24 Oct 2016 after more than 18 months of dreaming & planning.

“Thanks to my family for their support & understanding to allow me to undertake such a crazy project, to all of you for your encouragement & to Keith & the boys at MB Performance for their advice & tuning to make this Black Beast get it’s way here!

“I’m sharing some photos taken along the way with all you supporters.

“Oh, by the way, I’m changing my return route.

“The roads between Basu & Nyingchi are so bad it’s not worth taking the risk to be a hero twice.

“So I will spend 4 extra days going via the desert & grassland areas of Qinghai & Lanzhou then into Sichuan, Yunnan, Thailand, Malaysia & back to SG around mid-Nov.

“My Tibetan guide Lhakpa Tenzin says this is the first GT-R or any supercar to ever make it to EBC. I hope it’s true. Cheers!”

1. Mount Everest, also known in Nepal as Sagarmāthā and in China as Chomolungma/珠穆朗玛峰, is Earth's highest mountain. Its peak is 8,848 metres (29,029 ft) above sea level.

2. Mount Everest is located in the Mahalangur mountain range in Nepal.

3. There are 2 base camps - one is the Annarpurna base camp at the south face of Everest at Ghandruk in Nepal, while the other is at the north face in Tibet near the Rongbuk Monastery. (courtesy of Chuan Hoong himself)

4. Although Mount Everest is the highest mountain (altitude-wise), the tallest mountain (physical distance from foot of mountain to its peak) is Mauna Kea, at 10,000 meters tall compared to 8,850 meters for Mount Everest.