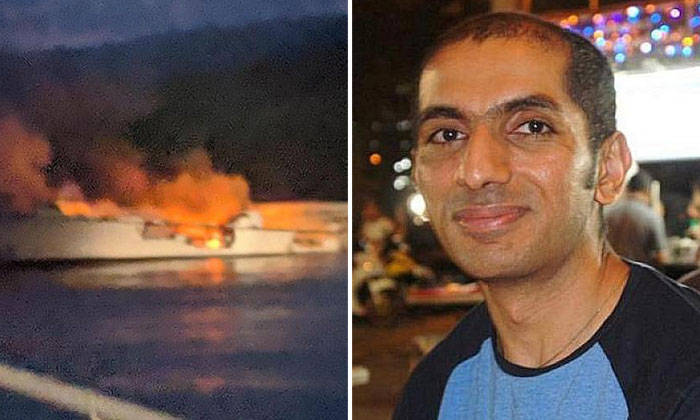 A Singaporean is feared to be among the 34 people killed in a raging fire on a dive vessel off Santa Barbara in California.

Mr Sunil Singh Sandhu, 46, who had lived and worked in the United States for more than two decades, took up scuba diving only recently, his family in Singapore said yesterday.

His father, Mr Sojit Singh, 77, told The New Paper that his heart sank when he heard the news that his son was believed to be one of the victims.

The retiree, who has two daughters, said over the phone: "My mind went blank. I thought this was a hoax. My whole life is gone. I can never find another boy like him.

"I never had to worry about my son. He was a nice boy who had no bad habits. The only thing that I worried about was him not being married."

The fire broke out on the 23m-long Conception at 3.15am (6.15pm Singapore time) on Monday as it was moored off Santa Cruz Island.

It was reported to be one of California's worst maritime disasters in decades.

The Conception had sailed for the Channel Islands in California on Saturday morning.

The passengers, who were below deck, were all believed to have died.

Only the five crew members, who were topside and awake when the fire started, managed to escape and raised the alarm, The Los Angeles Times reported.

TNP understands from Mr Sunil Singh's family that another Singaporean could be among the dead.

Mr Sunil Singh, who had had a US green card for 24 years, called his parents every week and visited them at least once a year. His last visit was in March, for two weeks, said Mr Sojit Singh.

"He was a health fanatic and had a very good physique. He loved indulging in local food like barbecued stingray from Adam Road Food Centre. We had that for dinner as a family while he was here."

Mr Sunil Singh, who scored straight As for his A levels at Saint Andrew's Junior College, studied electrical engineering at Christian Brothers University in Memphis, Tennessee.

He later did his master's and PhD at Stanford University and worked as a research scientist in Palo Alto, California.

"Sunil was a brilliant child who excelled in his studies," said Mr Sojit Singh.

The last time the father and son spoke was last Friday.

They discussed the younger Mr Singh's first scuba diving experience, after he picked up the activity two months ago.

Mr Sojit Singh said: "I told him to be careful because scuba diving can be a dangerous sport.

"I didn't know that he was going for another trip. I had been trying to persuade him to come back to Singapore."

Rescuers have found the bodies of 11 women and nine men, leaving 14 yet to be recovered, the Associated Press reported.

A team from California's Department of Justice has begun mapping DNA profiles of the victims, which will be compared with samples from family members. Mr Sunil Singh's family said they have been asked to provide DNA samples.

Mr Sojit Singh told TNP: "My son had a beautiful character. He was always smiling and never short-tempered. That is how I will always remember him."