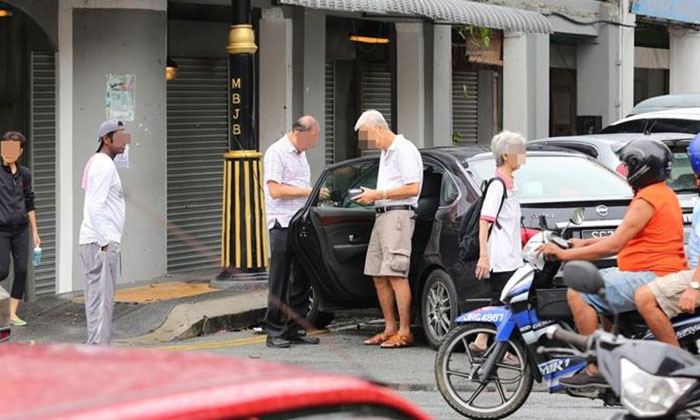 Singaporean drivers are among those being targeted by parking bay hoggers in Johor Bahru, Malaysia.

According to Shin Min Daily News and China Press, up to nine such hoggers are frequently operating from Jalan Trus, between the Johor Bahru Old Chinese Temple and Restoran Hua Mui.

Each of them can earn up to $13 a day, simply by hogging lots and demanding payment from motorists who need the space.

Many Singaporean drivers who were targeted often complied just to avoid trouble.

Recently, a driver was even beaten up by a hogger near Rose Cottage Hotel after refusing to pay.

Since a crackdown by the police last year, there has been a decrease in the number of hoggers.

However, the number has gone up again since the start of 2018, with the hoggers becoming ever more brazen, often adopting coercive methods to solicit money from drivers, reports China Press.

The amount they ask for usually ranges between $1 and $1.30.

Reporters later headed to Jalan Trus and spoke to some of the owners of establishments along the road, as well as drivers.

They said that the hoggers were gone for a period of time, but started surfacing again in the recent weeks.

The reporters also managed to speak to a hogger who said that he would operate along the same stretch of road every day, and fetch about $13 a day.

The hogger also claimed that he never once insisted on getting paid, and would not damage the driver’s car even if they refused to fork out the cash.

He added that sometimes he would even inform the drivers when they forget to place parking coupons on their cars.

This comes in contradiction with accounts by several members of the public, who said that they were coerced into paying the hoggers.

A victim said that he already paid for the parking fees, and was en route to retrieve his vehicle when he ran into a hogger who asked for money from him.

“These hoggers will lie down by your vehicle so you can't move it, or knock on the windows to ask for money.