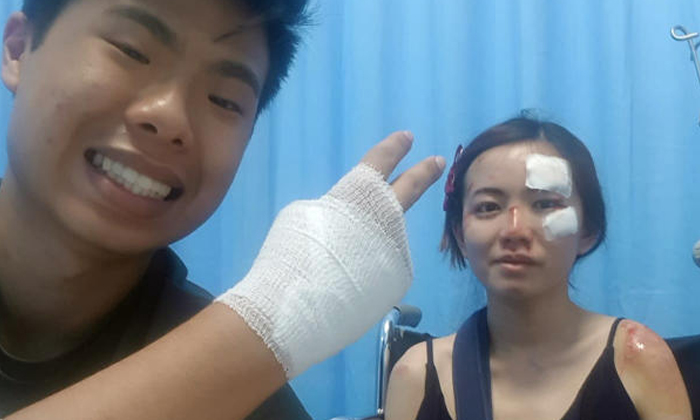 What was supposed to be a four-day getaway for a Singaporean couple turned to hell after they were robbed, left injured, and harassed in Bali last week.

Mr Eugene Aathar, a 24-year-old manager in a cleaning company, told The Straits Times that he and his wife were returning to La Vie Villa in Kuta on a scooter after 2am on May 6.

Two men on a motorcycle suddenly caught up with the couple from their left, with one man snatching the phone from Ms Ho.

They also kicked the scooter before riding off, causing the couple to fall off.

According to Mr Aathar, he asked passers-by for help and a man approached him to ask where his scooter was. When Mr Aathar pointed at the scooter, which was carrying 12 million rupiah belonging to the couple, the man rode off on it.

The couple were eventually taken to the Siloam Hospital Denpasar by a passing van driver.

While Mr Aathar had minor injuries, Ms Ho suffered a concussion and a fractured shoulder, among other injuries. She also experienced memory loss, reported ST.

But the couple's ordeal did not end there.

Mr Aathar said the villa's staff harassed them and demanded 250 million rupiah (around $23,700) as compensation for the stolen scooter, which the couple had rented for 125,000 rupiah (S$12).

They reportedly only stopped when Mr Aathar paid them 12 million rupiah.

Related Stories
Influencer-DJ shares how phone was stolen by men who used molest as diversion tactic in Bali
Jeanette Aw almost pickpocketed in Spain during solo trip: Here's how to stay safe abroad
Travellers taking coach from S'pore get stranded before finally arriving in KL after 12 hours
More About:
robbery
travel
injured