'Haolian' guy shows off $1,000 notes to cabby, tells him 'why you can't achieve great things' 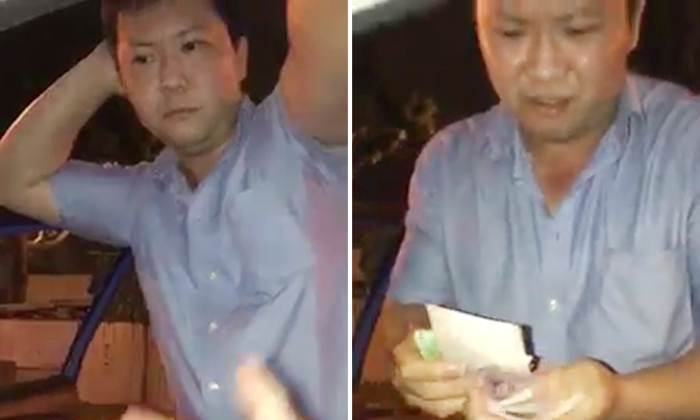 You have not seen obnoxious until you come across this guy who showed off his 'wealth' to a taxi driver and even proudly posed for the camera while being filmed.

In this case, calling him 'haolian' would be an understatement.

Stomper Peter alerted Stomp to a posting by Facebook user Yan Ting Ong, who yesterday (Apr 27) uploaded a video of the incident and a WhatsApp screenshot explaining what happened.

It is unclear when and where exactly the dispute took place, however.

Based on the WhatsApp group message from the cabby to his friends, the passenger had apparently quarrelled with some female companions and hence, took his anger out on the taxi driver.

The video started off the man posing, flashing a twist sign and even going, "Yo, yo, yo, yo, yo!" as the taxi driver recorded him on camera.

At that point, the cabby had already called the police and wanted the other party to move away so that he could close his taxi door. He had also given the passenger a fare refund.

Although the passenger responded, "You want to close [the door] then just close," he did not budge.

The cabby once again requested that the guy give way, so that he could close his door as he had kept his money in a side compartment there.

He then took out a big wad of $1,000 bills and started sifting through it.

Despite repeated requests from the cabby that the man move away so that he could close the door, the latter refused to comply and continued going through his cash.

He later replied, "You want to close then just close it daringly. Be a man. Must have guts to slam the door. Don't be like a chao ah gua, people stand there and block your way, you can't achieve great things.

"Do you know why you are a taxi driver today? Because you can't achieve great things."

The passenger then reached into the taxi and tried to make a grab at the driver, who tried to avoid him and said, "I'm not close to you, please do not touch my things."

The taxi uncle had also said in his WhatsApp chat that he was "lazy" to Stomp the incident. Never mind, uncle. We help you!

We think every profession is challenging in its own way and being a taxi driver is a noble job too. How many of us can stand: