Woman's dad dies 3 months after being diagnosed with cancer: 'I wish we had more time' 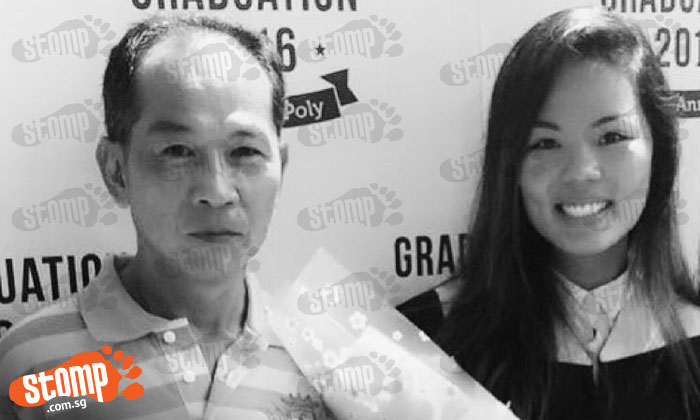 Stomper J shares a touching story about her and her father, reminding us to cherish our loved ones before it is too late.

From a young age, Stomper J has loved her dad deeply and she was the one whom he doted on her the most too.

However, as she grew up, the distance between them grew wider due to the fact that Stomper J's parents got divorced.

She would only see her father every Sunday whenever she headed over to her grandmother's house for gatherings. If she did not turn up, her father would call her out of concern.

There was even once when Stomper J mentioned that she would take care of him in the future, earning a smile from her dad.

On 30 June 2016, Stomper J found out that her dad was suffering from the last stage of stomach cancer and was left with three to six months to live.

Upon hearing the news, Stomper J broke down and called her dad, crying continuously. For 21 years of her life, she has not heard her dad cry but he assured her that he would get well soon.

At that point, Stomper J told herself that she had to give her best in caring for her dad and so, she stopped all her usual daily activities and focused on him.

She admitted that taking care of someone diagnosed with last stage cancer was not easy at all and she had to act cheerful in front of her dad and give him her assurance.

However, deep in her heart, it was very painful handling those situations because she could never understand the pain he was facing.

During the last three months of his life, Stomper J spent her time with him by playing songs for him to sing, telling him how she pictured their future to be like, bringing him to chemotherapy and bringing him out to buy food or fruits he loved.

Stomper J really enjoyed those moments and wished she could have spent more time with him. She admitted that being close with her dad during those three months felt very good.

After her dad's condition worsened and the cancer spread to his liver, bones and lymph nodes, he stopped trying to get better and this made Stomper J really upset because she did not want to lose him at all.

For someone who did not text at all, her dad messaged her 'J, I'm so sorry.' and without her knowing, he told her husband to take care of her.

Stomper J's dad passed away last month, with her last words telling him to rest in peace.

J told Stomp in an emotional email: "Well, I can never forget how tightly he gripped my hand for assurance. Cherish your loved ones before its too late."

Related Stories
Father celebrates daughter's one-month birthday with a flock of drones in China
Devoted daughter carries paralysed dad out for walks on the street thrice a day
S'porean man dies trying to save daughter at JB waterfall: 'He was a great dad'
confession
touching
death
cancer
heartbreaking