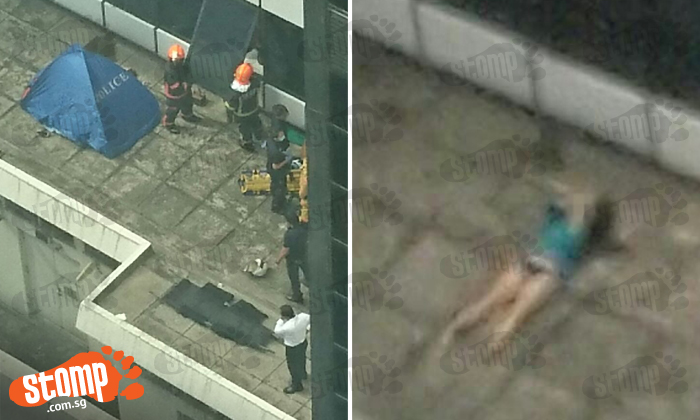 A Chinese woman in her 40s was found dead on the fourth floor parapet of an office building along 22 Malacca Street this morning (Aug 10).

A Stomper, who had been in a building adjacent to where the incident happened, sent in photos showing the scene via WhatsApp.

He told Stomp in a phone interview:

"I saw this at around ten plus this morning. A window on the tenth floor was open. The woman was in only a top and undies."

In response to media queries, a Police spokesperson told Stomp:

"Police received a call on 10 August 2016 at about 9.18am, requesting for assistance at a building along Malacca Street.

"Upon arrival, a woman was found lying motionless on the fourth floor parapet of the building. She was pronounced dead by paramedics at the scene.

The Singapore Civil Defence Force (SCDF) said they were alerted to the incident at about 9.43am today.

They dispatched one fire engine and one ambulance to the scene at 22 Malacca Street, where a Chinese woman in her 40s was declared dead.

A search on 22 Malacca Street identifies the location as the RB Capital Building.