Woman tearfully breaks down after meeting racist passenger on bus: 'You are Black, go sit in front!' 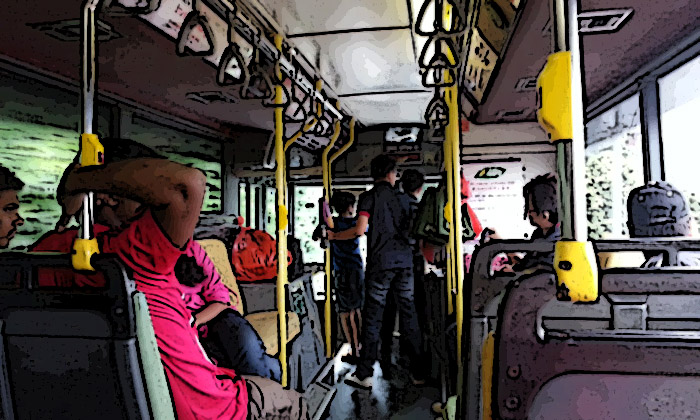 A Singaporean woman was utterly shocked to experience outright racism on the bus on Thursday (June 23) that she broke down recalling the incident.

A man was unhappy that she chose to sit near him, and yelled at her, "You are black!"

"Earlier today at around 1.30pm, I boarded bus 945 headed towards Bukit Batok Interchange.

"After paying my fare I proceeded towards the back of the bus where I took a seat which was on the left of the aisle.

"A man seated on the right of the aisle then proceeded to shout at me, and I quote, 'You are Black, go sit in front!'

"At first I was taken aback, but I looked at him and said, 'I have paid my fare just like everyone else and I can choose to sit anywhere I like. What does this have to do with my skin colour?'

"To which he replied, 'You are Black and I am not. I am Brown, so you go sit in front!'

"I again refused and remained at the same seat."

According to Devaki, this man is in his late 30s or early 40s and is balding with a missing front tooth and has a tan complexion.

He allegedly remained agitated due to her refusal to change seat, and pointed at her with aggressive gestures.

He retorted, "I am from ISRAEL; is this how you speak to an ISRAELI?!"

In the comments, the woman noted that he spoke with a clear, Singaporean accent.

"Not wanting to further aggravate the situation I looked him dead-straight in eyes and said, 'So what if you're an Israeli? I'm a Singaporean but just because you are an Israeli does that automatically give you the right to be a racist?'

"To this he further went on to repeat his first statement many, many times, which was of me being a darker complexion and therefore should not sit near him throughout the bus journey to Bukit Batok Interchange."

When asked if he seemed mentally unstable, Devaki said he did not seem so.

However, she was upset that nobody on board the bus decided to speak up for for her.

"As the bus entered the interchange, I went to speak with the Bus Captain as I wanted to make a complaint. He did not even bother to hear me out nor stop the bus at any time when this man was screaming at me in public but he just told me to go to the service counter.

"I thanked him and found the service counter.

"I was strong throughout the entire bus ride but when the lady at the helpdesk asked me to recall and elaborate what had happened on the bus, I just broke down.

"It was utterly humiliating for me to explain myself and at the same time wonder how it is possible that being a female, dark complexioned Indian and a minority race in Singapore, be still subject to RACISM in 2016."

As per the suggestion of the service counter staff, Devaki lodged an official complaint and a police report.

"I am not writing this post to gain sympathy or to instigate against people of any particular citizenship/racial/ethic group. Nor is this a rant written out of boredom or an attempt to tarnish the image of any public service company.

"What I do want people who took the time to read this, is to know that racism is REAL in Singapore.

"Today's incident just created a shift within me and I felt that I do not need to tolerate such insensitivity from anyone.

"I do know that racism is NOT the way forward.

"I am not asking anyone to be a so-called 'hero' and run to help anyone who is in distress. We all have our reasons as to why we choose to stay silent.

"But at times like these, if we could speak up and stand up for one another, Singapore would be a much better place to live in.

"I am a woman, an Indian and above all, a Singaporean. This is my home and I refuse to be marginalised by the colour of my skin.

"I am dark by Asian standards and I'm pretty damn proud of it. Today I have been discriminated against due to the colour of my skin.

"Yesterday it was someone else, tomorrow it will be someone new. Young or old, slim or plump, fair or dark, racism has NO EXCUSE.

"So for those of you who are still on the fence regarding the issue of racism existing, you best believe now that it still does, even in modern day 2016 Singapore."