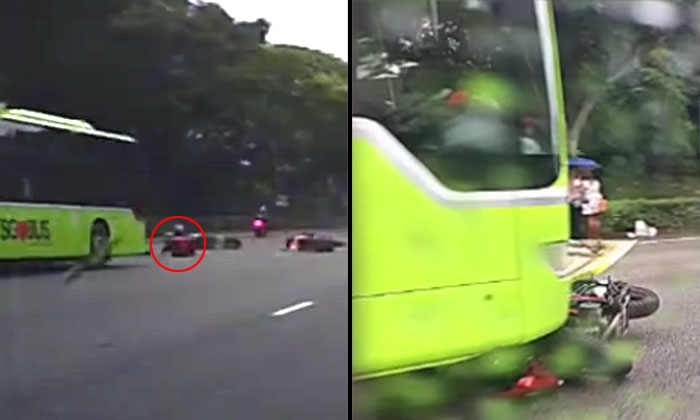 A woman was left with spinal injuries and abrasions after the motorcycle she was on hit another motorbike that had skidded, sending her right onto the path of an oncoming bus.

The accident happened on the MCE at around 8am yesterday (Dec 28), Shin Min Daily News and Lianhe Zaobao reported.

A motorcyclist and his pillion rider had first fallen on the road, and this caused another motorcyclist behind them to brake to try to avoid crashing into them.

However, the second motorcycle hit the fallen bike, sending the vehicle, rider and pillion rider skidding onto the path of an oncoming bus, service number 97E.

Though the bus driver jammed on the brakes, the pillion rider from the second motorcycle ended up being trapped under the vehicle.

The woman who was trapped under the bus suffered abrasions as well as spinal injuries.

According to Tower Transit, all 30 passengers on the bus took another bus and left the scene.