Woman stabbed by lovestruck man at VivoCity: He hinted he wanted to have sex with me 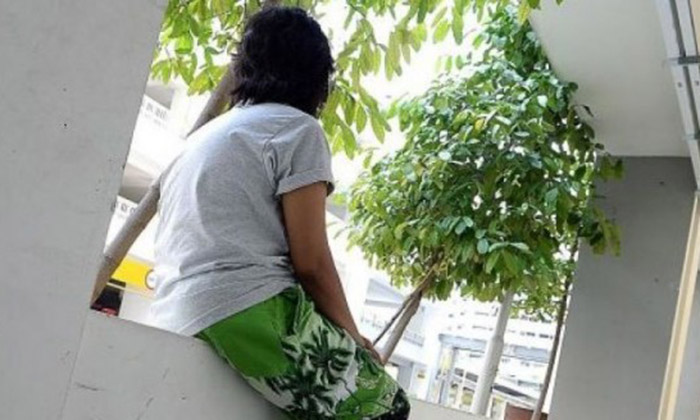 As she prepared popiah for her customers, she did not notice a man creeping up behind her.

Blood gushed out, and she collapsed as a colleague screamed for help.

Her attacker was familiar to her - a man who had been courting her despite being rebuffed repeatedly.

Security guard Taib Saleh, 66, was jailed for 28 months on Wednesday for stabbing Ms Noraisha at her stall in a Kopitiam foodcourt at VivoCity on Feb 26.

He had been obsessed with Ms Noraisha and the court heard that he was suffering from a major depressive disorder.

Recalling the attack, she told The New Paper on Thursday: "I don't know how to describe the pain, but it hurt so much.

"All I could think of was my daughter and how I would never see her again."

Ms Noraisha said she met Taib 10 years ago when they were both working in the security line.

They met again in 2014 when Taib bought food from her stall and they exchanged phone numbers.

Taib started texting her once a week and would ask about her daily activities.

She always replied, under the impression that they were just friends.

She said: "He has a wife and two children, and he is older than me by 22 years. I thought nothing would happen."

But late last year, Taib started visiting her twice a week at the stall where she worked.

His text messages also became suggestive as he kept hinting he wanted to have sex with her, she said.

She said: "That was wrong, he is a married man and I never did see him that way."

Ms Noraisha stopped replying to his texts as she tried to distance herself from Taib.

But his messages, calls and visits continued.

Earlier this year, she got her older sister and younger brother to tell Taib to stay away.

"I kept telling him I could never be his girlfriend and my siblings tried to tell him that too," she said.

But she said Taib continued to visit her at her workplace and text her.

On Feb 26, the day of the attack, she texted him several times to stay away.

She believes those messages could have sparked the attack that afternoon.

Ms Noraisha slumped onto a chair as her blood spurted on the floor.

"There was so much blood at that point, I could not even think. I thought I was going to die," she said.

Mr Larry Liem, 40, an off-duty officer of the Singapore Police Force who was in the foodcourt, managed to disarm Taib.

Ms Noraisha was taken to the Singapore General Hospital, where she had to be resuscitated because of her abnormally low blood pressure.

Her left kidney was removed during surgery.

She also has a 15cm scar running down her stomach.

Even today, she still feels a lot of pain and has yet to return to work.

She said her long absence from work has taken a toll on her family's finances.

Although her medical bills are covered by a social welfare organisation, she is worried about her rent and utilities.

Ms Noraisha, a divorcee, said she now depends on her 19-year-old daughter, who works in administration, to provide for the household.

A spokesman for the Ministry of Social and Family Development told TNP that its officers had reviewed Ms Noraisha's case and found that "her household income is sufficient for her family to cope financially".

When asked about Hari Raya Aidilfitri next Wednesday, Ms Noraisha said she will not be inviting anyone to her home.

"How can I? Since the incident, I can't even do anything. I regret ever talking to him."

Related Stories
VivoCity popiah seller who was stabbed by elderly man smitten with her loses kidney
More About:
stabbing